Coal is fossil fuel or fuel that comes from the remains of prehistoric plants or animals.

The formation of coal occurs over millions of years via a process known as carbonation. In this process, dead vegetation is converted into carbon-rich coal under very high temperature and pressure.

Minerals and energy play a very important role in the modern world. Rapid evolution in industrialization and growth in human population has increased the usage of minerals and different forms of energy to a very high level. But one has to understand that the natural resources are not unlimited. Fossil fuels such as natural gas, petroleum, and coal are used to meet most of our energy needs.

Coal is composed of carbon, hydrogen, oxygen, nitrogen, sulphur, moisture, and incombustible mineral matter (i.e., ash). Fluorinated gases are not formed by coal combustion. Coals are formed from the accumulation of vegetable debris in specialized environments.

Obtaining coal from the mines is a difficult job. First, the dirt above the coal deposit is removed. When the coal is exposed, explosives are used to break it into smaller pieces. The coal thus collected is loaded into wagons and lifted to the surface. The mines enter and leave the mine by an elevator through a vertical space called the shaft. Coal mines can easily catch fire and it is very difficult to bring the fire under control.

Coal takes millions of years to form. Millions of years ago, there were places on earth with dense forests in wetlands due to natural disasters such as floods, tsunami, landslides, etc. Over the years, over these forests more and more soil was compiling. These trees were protected by oxidation from biodegradation, usually via mud or acidic water. This traps the carbon in the sediments that were buried. Carbonization happens, carbonization is a phase in which vegetation becomes carbon. It is a slow process. 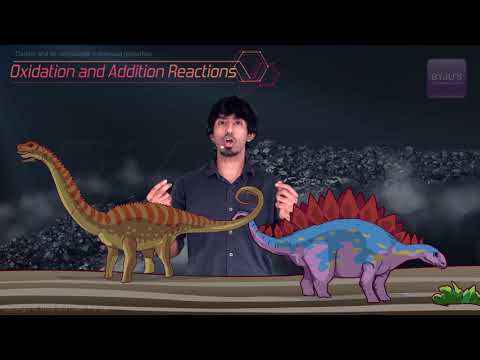 Process of Formation of Coal

This is the second stage in the coal formation. It is a dark brown matter formed due to the pressure exerted by the sediments overlying the organic matter. It consists of traces of plants

This is the third stage in the formation of coal. It is formed due to the added pressure. This is also called as soft coal.

This is the fourth stage in the coal formation. It is formed due to the high pressure and high temperature for a long period of time. It is hard, lustrous and has the highest percentage of carbon among peat, lignite, bituminous and anthracite. This is also called as hard coal.

Petroleum and natural gas deposits are usually found in the coastal regions. 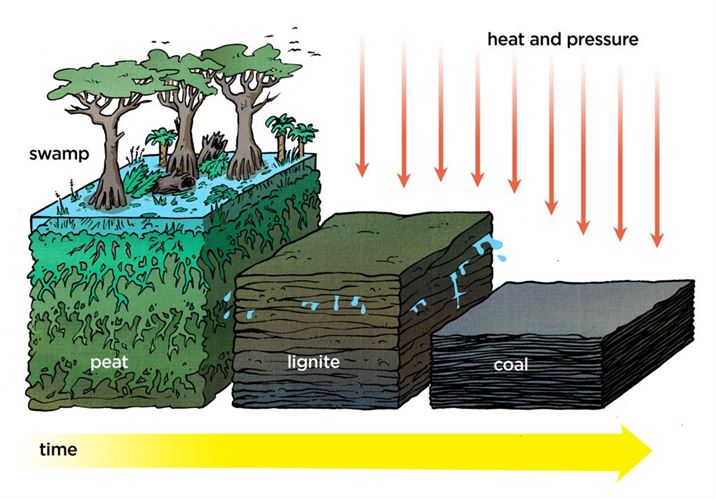 Fossil fuels such as coal and petroleum mainly originate from the buried plants, animals and microorganisms which were buried more than a hundred million years ago and were subjected to high temperature and pressure continuously. Overlaying of sediments over the burial results in the formation of fossil fuels due to exposure to high pressure for a very long period of time.

For More Information On Formation Of Fossil Fuels, Watch The Below Video: 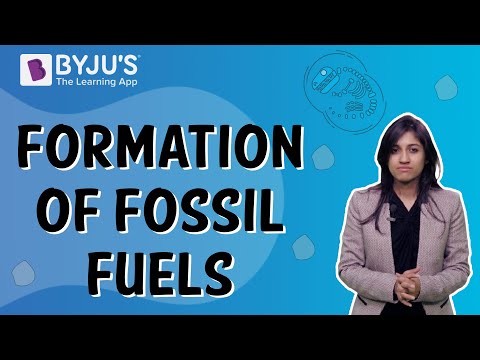 Where is coal formed?

The energy in coal comes from energy stored in giant plants, which lived in swamp forests hundreds of millions of years ago, even before the dinosaurs! When those giant plants and ferns died, layers at the bottom of the swamps were created. Water and soil began to pile up around the remains of the dying vine.

Which coal is the best quality?

Anthracite, often called hard coal, is a hard, compact carbon variety with a submetallic luster. It has the highest carbon content, the fewest impurities, and the highest energy density of all coal types, and is the highest coals ranking.

Why is coal known as black diamond?

Coal is said to be a black diamond because it is used in a variety of applications. It is used in the kitchen as food, and in factories as a raw material. Coal is also utilized in electricity generation.

Which type of rock is coal?

Coal is an organic sedimentary rock that forms from plant materials deposition and retention, typically in a swamp setting. Coal is a combustible rock, and is one of the three most important fossil fuels, along with oil and natural gas.

What is coal and its uses?

Coal has many significant uses all over the world. Coal’s most important applications are in power generation, steel manufacturing, cement production and as liquid coal. Different coal types have varying uses. Steam coal-also known as thermal coal-is used primarily in generating power.

How is coal formed?

Coal is formed from remains of plants buried beneath the crust of the earth. Over time, geological actions change the chemical and physical properties of the remains to create a solid material i.e. coal. Coal is Gray or a brownish black sedimentary rock ready to be combustible.

Where does coal come from originally?

Coal is a fossil fuel that is the altered vestiges of ancient vegetation that originally existed in swamps that peat bogs. Today’s energy we obtain from coal comes from the energy plants absorbed from the sun millions of years ago.

What is the importance of coal?

Coal has many significant uses all over the world. Coal’s most significant uses are in electricity generation, steel production, cement production and as liquid fuel. Various coal types have different uses. Steam coal-also known as thermal coal-is used primarily in generating power.

How does coal mining destroy the environment?

Coal mining increases the risk of loosening top soils into streams and waterways, and the sediments are contaminating our water and can smother downstream plant life and even kill fish. Coal has the sulphur and nitrogen traces. Those are released into the atmosphere when burned.

Anthracite is the coal with the highest carbon percentage of over 87%. The carbon content is 77-87 percent in bituminous, 71-77 percent in sub-bituminous and 60-70 percent in lignite. Lignite has the least amount of carbon and therefore the highest ash content.

For more information regarding the formation of coal and other fossil fuels, download BYJU’S -the learning app to play store or app store.

Test your Knowledge on Formation Of Fossil Fuels
Q5