Hydrogen - Position In The Periodic Table

What is the Position of Hydrogen in the Periodic Table?

When hydrogen loses an electron and forms a cation, it resembles alkali metals but when it gains an electron and becomes a uni-negative ion it shows similarity to halogens. Looking at these properties  the position of hydrogen in the periodic table was a big question. 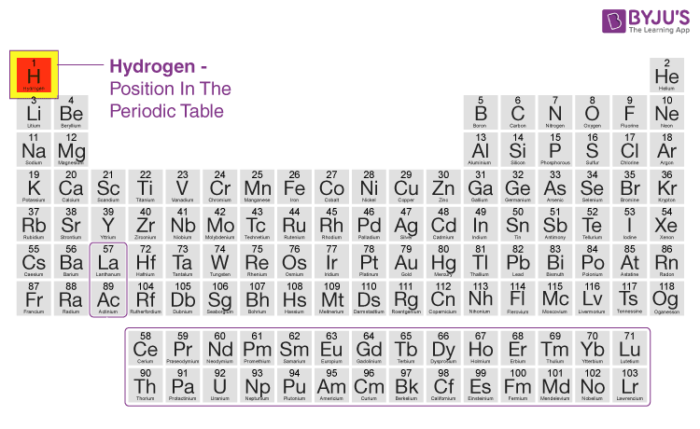 Hydrogen in the Periodic Table

Moving on to the compound formation, hydrogen forms oxides, halides and sulphides resembling the alkali metals, but unlike the alkali metals it has a very high ionization enthalpy, and so it lacks metallic characteristics under normal conditions. When we look in terms of ionization enthalpy, it is found that hydrogen resembles more to halogens than alkali metals. For example, ΔiH of lithium is 520 kJ mol-1, fluorine is 1680 kJ mol-1 and for hydrogen, it is 1312 kJ mol-1. It exists as a diatomic molecule like that of halogens (for example chlorine Cl2), there is a single hydrogen bond when H2 molecule is formed.

Though hydrogen shows a lot of resemblance to halogens and alkali metals, it is very different from both. So a great thought has to be given for the position of hydrogen in the periodic table. When hydrogen loses electron, the size of its nucleus decreases and becomes almost 1.5 × 10-3pm, which is very small as compared to the atomic sizes of normal metals and hence hydrogen ion does not exist freely in nature.

Is hydrogen a gas or metal?

Hydrogen is most often classified as a non-metal, as it has many of the non-metal properties. This is a gas at room temperature, for example. However, in group 1, hydrogen shares properties with the alkaline metals. Hydrogen conducts electricity in liquid form just like a metal does.

What is so special about hydrogen?

Hydrogen is the simplest and most abundant element in the universe. It is composed of a single proton and a single electron. Liquid hydrogen is used in the study of the superconductors and makes an excellent rocket fuel when combined with liquid oxygen. Numerous compounds are formed by hydrogen combined with other elements.

Where is hydrogen commonly used?

In the glass industry hydrogen is used to make flat glass sheets as a protective atmosphere. It is used as a flushing gas in the electronics sector during the manufacture of silicon chips. The low hydrogen density made it a natural choice for one of its first practical applications-filling balloons and airships.

Why is hydrogen so important?

In the human body the most important hydrogen function is to keep you hydrated. Water consists of hydrogen and oxygen, and is absorbed by the body’s cells. Therefore, it is a crucial element that is used as a fuel, military weapons, etc., not in our body.

What are 2 chemical properties of oxygen?

Two atoms of the element bind to form dioxygen at standard temperature and pressure (STP), a colourless, odourless, tasteless diatomic gas with formula O2. Oxygen is on the periodic table a member of the chalcogen group, and is a highly reactive non-metallic element.

The unique behaviour of this  atom is the reason for it being placed separately in the periodic table. To know more about hydrogen, its properties and the unique characteristics associated with it go for BYJU’S – The Learning App.

Test your knowledge on Hydrogen Position In The Periodic Table
Q5