Some important compounds of Silicon:

Silica and silicates are the most abundant compounds on the earth’s crust(around 95%). Silicon dioxide(SiO2) which is also known as silica is found in many crystallographic forms. Some of the crystalline forms of silica are quartz, cristobalite, tridymite and these are also interconvertible when applied suitable temperature. Silicon dioxide is covalent in nature and is attached to four oxygen atoms tetrahedrally.

Silicones: It is a group of organosilicon polymers which have repeating units. Alkyl or Aryl substituted silicones are the starting products for the manufacture of silicones. As we know that silicones are surrounded by nonpolar alkyl group which is water repelling in nature. They have high thermal stability and are resistant to oxidation and chemicals. This compound has wide application as it is used as an electrical insulator and also in surgeries. A big number of silicates unit exist which are zeolites etc.The structure of silicate is SiO44-, in which the four oxygen atom is attached to one silicon atom. When silicate unit is joined together it forms ring, chain as well as 3-D structure. Glass and cement are two important silicates that are man-made. Aluminosilicate is formed when in the three-dimensional structure of silicon dioxide the silicon atoms are displaced by some aluminium atoms. Zeolites are basically used in the petrochemical industries as a catalyst. Alcohols can be directly converted to gasoline by using a zeolite called ZSM-5. Hard water can also be softened using these zeolites. 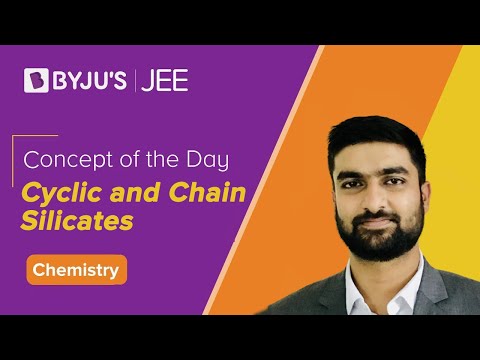 For any queries related to this topic, contact our mentors at BYJU’S.

Test your Knowledge on Important compounds of silicon!
Q5