Download Class 11 Chemistry Chapter 2 Structure of Atom Important Questions with Answers PDF by clicking on the button below.

Q1. Arrange s, p and d sub-shells of a shell in the increasing order of effective nuclear charge (Zeff) experienced by the electron present in them.

Q2. Show the distribution of electrons in an oxygen atom (atomic number 8) using an orbital diagram.

From the above diagram, it can be concluded that oxygen has two unpaired electrons.

Q4. Which of the following orbitals are degenerate?

Degenerate orbitals are those that have the same shells and subshells. Hence,

Q5. Calculate the total number of angular nodes and radial nodes present in the 3p orbital.

For the 3p – orbital, the principal quantum number is n = 3 and the azimuthal number is l = 1.

Number of angular nodes will be l = 1

Q6. The arrangement of orbitals on the basis of energy is based upon their (n+l) value. Lower the value of (n+1), the lower is the energy. For orbitals having the same values of (n+l), the orbital with a lower value of n will have lower energy.

I. Based upon the above information, arrange the following orbitals in the increasing order of energy.

II. Based upon the above information, solve the questions given below :

(a) Which of the following orbitals has the lowest energy?

(b) Which of the following orbitals has the highest energy?

Q7. Which of the following will not show deflection from the path on passing through an electric field?

Neutrons will not deviate from their path when passing through an electric field because they are neutral in nature and thus are unaffected by any electrical field.

Q8. An atom having atomic mass number 13 has 7 neutrons. What is the atomic number of the atom?

The atomic number can be calculated by

Hence, the atomic number will be 6.

Q9. Wavelengths of different radiations are given below:

Arrange these radiations in the increasing order of their energies.

This is explained by the orbital symmetry principle, which states that orbitals that are completely or partially filled in a given subshell have extra stability.

As a result, the 3d10 4s1 copper configuration is more symmetrical and stable than the 3d9 4s2 configuration.

Q12. According to de Broglie, the matter should exhibit dual behaviour, that is, both particle and wave like properties. However, a cricket ball of mass 100 g does not move like a wave when it is thrown by a bowler at a speed of 100 km/h. Calculate the wavelength of the ball and explain why it does not show wave nature.

According to de Broglie,

Therefore, in this case-

Since the wavelength is too small to detect, it does not exhibit wave nature.

Q13. What is the experimental evidence in support of the idea that electronic energies in an atom are quantized?

The bright-line spectrum demonstrates that an atom’s energy levels are quantized. Classical mechanics cannot explain the behaviour of electrons, atoms, and molecules, among other things. This is due to the fact that classical mechanics ignores the concept of matter’s dual nature. Quantum mechanics takes these theories into account.

Q14. Out of electrons and protons which one will have a higher velocity to produce matter waves of the same wavelength? Explain it.

Q15. A hypothetical electromagnetic wave is shown in Fig. Find out the wavelength of the radiation. 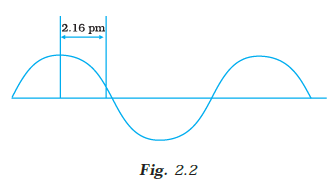 Q16. Chlorophyll present in green leaves of plants absorbs light at 4.620 x 1014 Hz. Calculate the wavelength of radiation in nanometer. Which part of the electromagnetic spectrum does it belong to?

Thus, it belongs to the visible region.

Q17. What is the difference between the terms orbit and orbital?

Q18. Table-tennis ball has a mass of 10 g and a speed of 90 m/s. If speed can be measured with an accuracy of 4% what will be the uncertainty in speed and position?

If the Heisenberg uncertainty principle is to be applied on an object with a mass of about a milligram, then,

The value of Δx.Δv obtained is very small and insignificant. As a result, for milligram-sized or heavier objects, the associated uncertainties are hardly significant.

The principal quantum number determines the energy of an electron in a hydrogen atom. As a result, the energy of the orbitals increases in the following way:

Q2. Match the quantum numbers with the information provided by these.

Q3. Match the following rules with their statements:

In the following questions a statement of Assertion (A) followed by a statement of Reason (R) is given. Choose the correct option out of the choices given below each question.

Q1. Assertion (A): All isotopes of a given element show the same type of chemical behaviour. Reason (R): The chemical properties of an atom are controlled by the number of electrons in the atom.

Correct Answer is (1.) Both A and R are true and R is the correct explanation of A.

All isotopes have the same atomic number, which means they have the same number of electrons. So, they bear similar chemical properties.

Q2. Assertion (A): Black body is an ideal body that emits and absorbs radiation of all frequencies.

Reason (R): The frequency of radiation emitted by a body goes from a lower frequency to a higher frequency with an increase in temperature.

Correct Answer is (2.) Both A and R are true but R is not the correct explanation of A.

Q3. Assertion (A): It is impossible to determine the exact position and exact momentum of an electron simultaneously.

Reason (R): The path of an electron in an atom is clearly defined.

The exact position and exact momentum of an electron cannot be determined simultaneously, according to Heisenberg’s uncertainty principle. As a result, the electron’s path in an atom is not well defined. 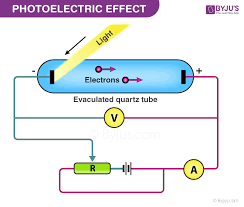 This experiment yielded the following results:

Thus, v < v0 and therefore, no electron will be emitted.

Q3. When an electric discharge is passed through hydrogen gas, the hydrogen molecules dissociate to produce excited hydrogen atoms. These excited atoms emit electromagnetic radiation of discrete frequencies which can be given by the general formula

What points of Bohr’s model of an atom can be used to arrive at this formula? Based on these points, derive the above formula giving a description of each step and each term.

The following are the two key points of Bohr’s model that can be used to derive the given formula:

(i) Electrons orbit the nucleus in a circular path with a fixed radius and energy. Orbits, stationary states, and allowed energy states are all names for these paths.

When an electron jumps from outer orbit n2 to inner orbit n1, the difference of energy (ΔE) is emitted.

Q4. Calculate the energy and frequency of the radiation emitted when an electron jumps from n = 3 to n = 2 in a hydrogen atom.

A modification to the Bohr model was required due to certain defects. The Bohr model is applied to atoms with a single electron. It cannot account for multi-electron atoms. It also claims that electrons move in circular orbits around the nucleus, which is incorrect.

The dual behaviour of matter and the Heisenberg uncertainty principle were two significant developments that contributed significantly to the formulation of such a model.

In 1972, Werner Heisenberg, a German physicist, stated the uncertainty principle, which is the result of the dual behaviour of matter and radiation. The existence of definite paths or trajectories of electrons and other similar particles is governed by the Heisenberg Uncertainty Principle, which is one of its most important implications.

Quantum mechanics is a theoretical science that studies the motions of microscopic objects that have both observable wave and particle properties. The new atom model is known as the Quantum Mechanical Model of Atom.