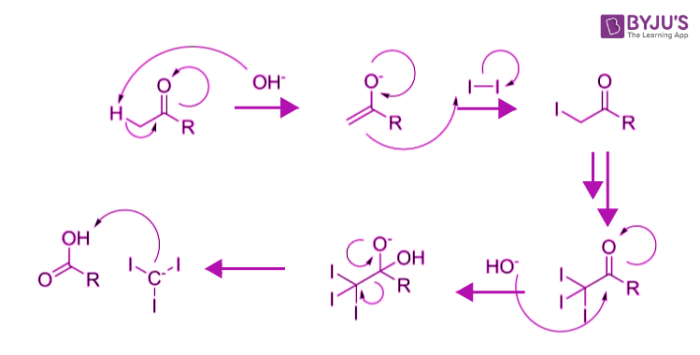 The only primary alcohol that provides the triiodomethane (iodoform) reaction is ethanol. If ‘R’ is a category of hydrocarbons, you have a secondary alcohol. This answer is provided by tonnes of secondary alcohols, but those that do all have a methyl group with the -OH group attached to the carbon.

What does iodoform test indicate?

The iodoform test reveals the presence of an aldehyde or ketone in which a methyl group is one of the groups immediately connected to the carbonyl carbon. Such a ketone is referred to as methyl ketone. The unknown is allowed to react with a mixture of excess iodine and excess hydroxide in the iodoform assay.

What is iodoform test used for?

The methyl ketone reaction of iodine and base is so reliable that the iodoform test (the appearance of a yellow precipitate) is used to test for methyl ketone presence. This is also the case while searching for alpha-position sensitive secondary alcohols containing at least one methyl group.

How do you do iodoform test?

For 3 ml of water and 10 drops of KI / I2 solution (a dark purple-brown solution), three drops of the compound to be evaluated are applied. Until the dark colour of the solution disappears to pink, 10 percent NaOH solution is applied dropwise.

Methyl ketones and secondary alcohols oxidizable to methyl ketones, such as isopropanol, are commonly limited by substrates. Ethanol and acetaldehyde, respectively, are the only main alcohol and aldehyde to undergo this reaction. The haloform reaction is also given by 1,3-Diketones like acetylacetone.