What are Man Made Fibres?

Synthetic fibres are made only from polymers found in natural gas and the by-products of petroleum. They include nylon, acrylics, polyurethane and polypropylene. Millions of tons of these fibres are produced all over the world each year.

Recommended Videos on Man Made Fibres 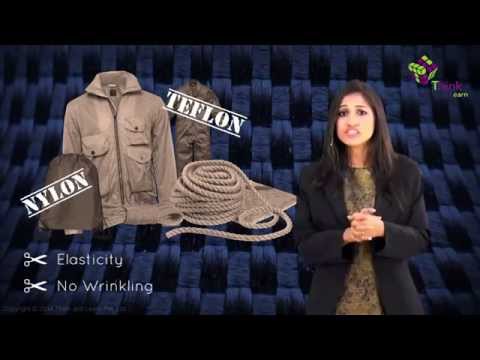 Man made fibres are considered under two main headings.

The fibres in this category may be classified into the following sub groups.

The use of natural fibre in the textile market is known to man from ancient times. However, the eighteenth and nineteenth centuries witnessed an era of industrial revolution resulting in tremendous upsurge in fibre. Synthetic fibres may be classified with reference to their chemical structure.

The following synthetic materials have become the basis of commercially important fibres.

Rayon and acetate are man-made fibres manufactured from a cellulose base, the cellulose being normally obtained from wood pulp and cotton linters. Invented by Chardonnet, a French chemist rayon was made cotton or wool pulp. He found that nitrocellulose fibres found in cotton or wood pulp can be chemically changed into smooth and shiny cellulose fibre. First called Chardonnet silk, this fibre was later named rayon. Its commercial production began in France in 1891.

Nylon fibre was discovered in the 1930s. Only one type of nylon – nylon 6,6 was selected for commercial production. Nylon-6,6 is made from two organic compounds each containing six carbon atoms. Nylon fibre has a variety of uses. A high molecular weight nylon 66 is only obtained if equimolecular amounts of the components are used. An excess of the components would terminate the chain by formation of an acid or amino end group.

Exhibiting properties similar to nylon polyester fibre is made from a chemical compound called ethylene glycol. Polyester fiber was invented in the United Kingdom in 1938. Its commercial production began only in 1950. In 1972 it replaced nylon as the largest produced man made fibre in the world and is used mainly in making synthetic textiles.

Which is the first man made Fibre?

Regenerated fibers such as viscose rayon in 1892 and cellulose acetate in 1918 were the first man made to produce fibres. These types of fibers are created by breaking down cellulose or wood pulp, and then by extrusion regeneration.

Is Silk a man made Fibre?

It is worth separating man-made fibers from natural fibers such as silk , cotton and wool. Synthetic fibers are made from polymers which do not exist naturally but are manufactured entirely in the chemical plant or laboratory, almost often from petroleum or natural gas by-products.

What are the properties of man made fibers

These materials are prized as fibres for their strength, resilience, heat and mildew resistance and ability to maintain a pressed shape. It is worth separating man-made fibers from natural fibers such as silk , cotton and wool.

What is Fibre made out of?

What type of fiber is best?

Soluble, viscous, and fermentable fibers tend to be the healthiest, by far. Starches immune are extremely safe too. Good dietary fiber sources include tomatoes, bananas, peas, legumes, nuts, dark chocolate, avocados, chia seeds and a number of other foods.

Test your Knowledge on Man made fibres!
Q5