Halogens and its Oxidation State

The halogens are the elements that form group 17 of the periodic table. They are reactive nonmetals and include fluorine, chlorine, bromine, and iodine.

Halogens are highly reactive non-metals. These elements greatly resemble each other in their properties. Group 17 elements are collectively called halogens (In Greek: halo means salt and genes mean producing, so collectively salt producing) and it consists of fluorine, chlorine, bromine, iodine, and astatine.

The similarity to this extent is not found in other groups of the periodic table. They have a regular gradation in the physical and chemical properties. Astatine is the only radioactive element in the group. They have seven electrons in their outermost shell (ns2np5) and are short of one electron from the configuration of the nearest noble gas. The chemical properties and reactivity of an element are determined by the oxidation state exhibited by them. 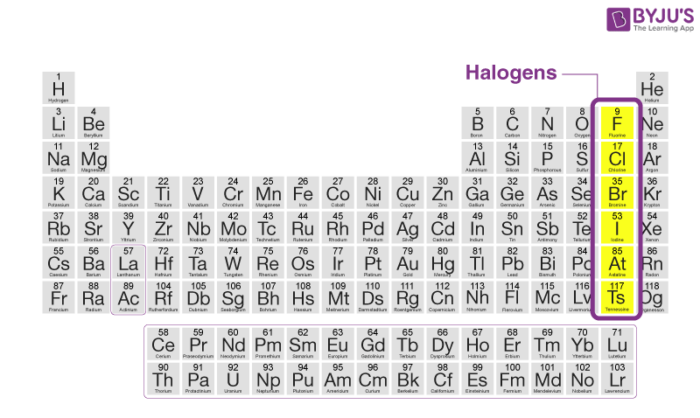 1. Halogens are highly reactive, they react with metals and non-metals in order to form halides. Their reactivity decreases as we move down the group. Halogens have strong oxidizing properties. F2 is the strongest oxidizing halogen. It easily oxidizes other halide ions present in solution or in the solid phase. In general, a halogen oxidizes halide ion which is of higher atomic number. For example:

From the standard electrode potential, the decreasing oxidizing ability of halogen can be easily observed.

2. The relative oxidizing nature of halogens can be illustrated by their reactions with water. Fluorine oxidizes water to oxygen. Whereas chlorine and bromine react with water in order to form respective hydrohalic and hypohalous acids. Iodine reacts with water in a non-spontaneous way. I– can be oxidized by water in the acidic medium. For example:

The members of group 17 have the smallest atomic radii in their respective periods. This is attributed to the fact that they have a maximum effective nuclear charge. Atomic and ionic radii increase from top to bottom in a group thus, it increases from fluorine to iodine due to the increasing number of quantum shells.

Members of group 17 have very little or no tendency to lose an electron. Thus, they have a very high value of ionisation enthalpy. Ionisation enthalpy decreases from top to bottom in the group due to the increase in atomic size.

Why is I-Cl bond more polar reactive than I2?

I-Cl bond is polar and weaker than I-I bond, so I-Cl is more reactive than I2.

Bleaching effect of Chlorine is permanent. Why?

It is due to the oxidation of coloured substances to colourless substances by nascent oxygen.

Compare the oxidising power of F2 and Cl2.

The electrode potential of F2 is maximum but that of I2 is minimum. This means that F2 can be reduced very easily but I2 is reduced less readily. Thus, F2 is the strongest oxidising agent while I2 is the weakest oxidising agent.

Unlike chlorine, fluorine forms only one oxoacid, HOF.

Due to small size, high electronegativity and unavailability of d- orbital in fluorine.