Oxoacids are basically acids that contain the element oxygen. As such, Phosphorus is known to form a number of oxoacids, for example: H3PO4, H3PO3, etc. In oxoacids of phosphorus, it is tetrahedrally surrounded by other atoms. Generally, all these acids are known to form at least one P=O bond and one P–OH bond.

P–P or P–H bonds are also found in addition to P=O bonds and P–OH bonds in oxoacids of phosphorus where the oxidation state of phosphorus is less than +5. These acids are generally seen too disproportionate to either lower and higher oxidation states. For instance, when phosphorous acid is heated, it gives phosphine and phosphoric acid. 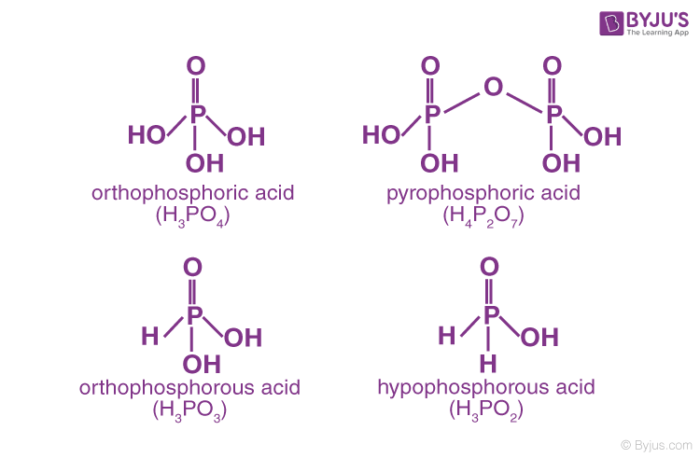 The P-H bonds in oxoacids cannot go through ionization to give H+ ions whereas the H atoms which are attached with oxygen in P-OH form are ionizable. Hence, we can say that only the H atoms attached with oxygen cause basicity. As a result phosphorous acid, H3PO3 is dibasic due to the presence of two P-OH bonds whereas phosphoric acid, H3PO4 is tribasic due to the presence of three P-OH bonds. Oxoacids of phosphorus having P-H bonds have strong reducing properties. For instance: hypophosphorous acid containing two P-H bonds acts as a good reducing agent.

This acid is formed by warming orthophosphoric acid at around 850 K. Metaphosphoric acid exists as a cyclic trimer, polymer or cyclic tetramer but not as a monomer.

When orthophosphonic acid is heated at about 250oC it forms tetrabasic acid.

This acid is formed when P4O10 is treated with bubbled water. Orthophosphoric Acid is basically a tribasic acid.

For detailed discussion on other topics like Oxoacids of sulphur, halogens you can visit BYJU’S or download the app.

Test your knowledge on Oxoacids Of Phosphorus
Q5