The name Reformatsky reaction is mostly kept in honour of Russian chemist Sergey Nikolaevich Reformatsky who discovered the reaction in 1887. This is a type of reaction that occurs between an alpha‐haloester and a carbonyl compound which can be a ketone, aldehyde, or an ester. The reaction mostly takes place in the presence of zinc. The reaction is also a representation of the extended reactions between carbonyl compounds with a dialkylzinc or an alkyl zinc halide.

One advantage of this reaction is that the isolation of the organozinc compound is not required. During the reaction process, a new carbon‐carbon linkage is created along with the formation of an organozinc halide and decomposition due to the presence of dilute acids.

The yields in the Reformatsky reaction are generally improved if the reaction is carried out in two steps.

This derivative is apparently formed in almost quantitative yield.

According to the general definition, the Reformatsky reaction is defined as an organic reaction that is used to convert ketone or an aldehyde and α-half ester to a β-hydroxy ester by using metallic zinc and acid workup. Here, inert solvent like diethyl ether or THF (tetrahydrofuran) is often used as a solvent for the reaction.

Condensation reaction of carbonyl compounds with alpha haloester in presence of zinc metal is known as the Reformatsky reaction.

The solvent most often used in this reaction is benzene or ether or a benzene ether mixture.

Mechanism of the Reaction 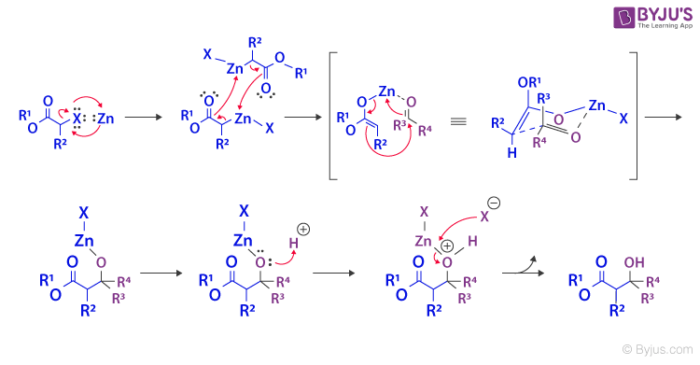 Notably, the product α-hydroxy esters are important substances required for natural product synthesis and in pharmaceuticals.

Some significant advantages of this reaction are;

What is the name reaction in organic chemistry?

A name reaction is a chemical reaction named after its creators or discoverers. Hundreds of such reactions are well-known enough to be named after individuals, within the tens of thousands of organic reactions that are known.

Is combustion an organic reaction?

Easy, exothermic chemical reaction of a fuel (usually oxygen) with an oxidizing agent. Carbon dioxide and water are created by complete combustion of a hydrocarbon like methane. Carbon monoxide is produced by incomplete combustion.

Is polymerization in organic reaction?

Polymerization is a mechanism by which an organic compound reacts with itself to create a compound of high molecular weight consisting of the initial compound’s repeating units. The reaction of ethene with sulphuric acid is an example of a cation-initiated polymerization.

How does a catalyst speed up a reaction?

Which reaction is exothermic?

Take up a quiz on Reformatsky Reaction
Q5