What are Aldehydes and ketones?

Aldehydes and ketones incorporate a carbonyl functional group, C=O. These are organic compounds with structures -CHO and RC(=O)R’, where R and R’ represent carbon-containing substituents respectively.

In aldehydes, the carbonyl group has one hydrogen atom attached to it together with either a 2nd hydrogen atom or a hydrogen group which may be an alkyl group or one containing a benzene ring.

One can notice that all these have the exact same end to the molecule. The only difference is the complexity of the other attached group.

Propane is generally written as CH3COCH3.  In pentanone, the carbonyl group could be in the middle of the chain or next to the end – giving either pentan-3-one or pentan-2-one. 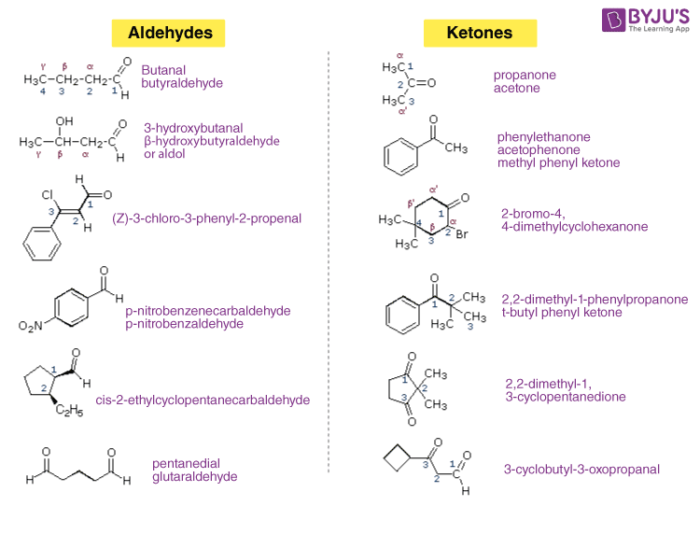 Occurrence of Ketones and Aldehydes

Preparation of Ketones and Aldehydes

Aldehydes and Ketones are obtained from products of many reactions. Some reactions for the synthetic preparation of Aldehyde and Ketone is mention below. 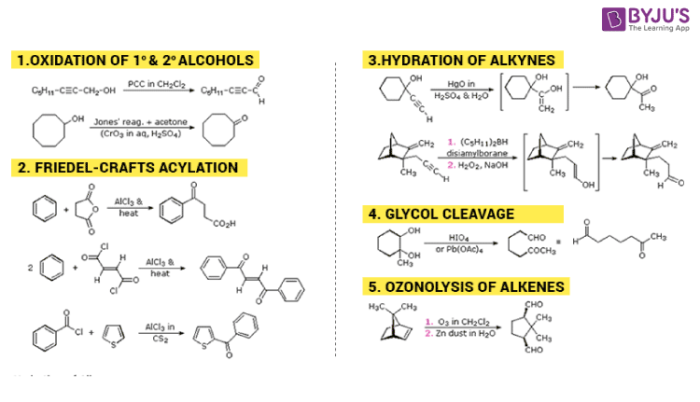 Stay tuned with BYJU’S to learn more about different types of aldehydes and ketones, their physical and chemical properties.

Uses of Aldehydes and Ketones

Formaldehyde is the simplest aldehyde whereas acetone is the smallest ketone. There are a number of aldehydes and ketones which find application due to their chemical properties. A few uses of Aldehydes and Ketones are listed below.

Acetaldehyde and Acetone can be distinguished by

It oxidizes acetaldehyde to acetic acid. Silver ions are reduced to silver metal. This gives silver mirror. Such silver mirror is not obtained with acetone. Hence, Tollens’ reagent is used to distinguish acetaldehyde and acetone.

Molisch, Schiffs, Iodoform reacts similar with aldehydes and ketones. But Tollen’s reagents gives silver mirror only to aldehyde not to ketone.

How are Aldehydes and Ketones Different?

The carbonyl carbon of an aldehyde has a hydrogen atom attached to it whereas that of a ketone is attached to two alkyl or aryl groups. The C-H bond in aldehydes makes them easily oxidizable (they are strong reducing agents).

Why are Aldehydes more Reactive towards Nucleophilic Substitutions than Ketones?

The two alkyl/aryl groups in ketones offer steric hindrance during substitution reactions. Since the hydrogen atom is relatively small, it barely offers any steric hindrance. This is the primary reason why aldehydes are more susceptible to nucleophilic substitutions. Also, the partially positive charge on the carbonyl carbon is stabilized by the two R groups in ketones.

Why are the Boiling Points of Ketones Higher than those of Aldehydes?

The presence of two electron-donating R-groups in ketones makes them more polar than aldehydes. The dipole moments that arise from this polarity account for the higher boiling points of ketones.

What are the uses of Ketones?

Ketones are used as excellent solvent in industry, acetone is used as a nail paint remover and paint thinner. They are also used in medicine , textiles, varnishes, plastics, paint remover, paraffin wax etc.

What are the uses of aldehydes?

The 40% solution of formaldehyde forms Formalin which is used in preserving biological specimens. It is also used in embalming, tanning, preparing glues and polymeric products, as germicides, insecticides, fungicides for plants, drug testing and photography etc. Acetaldehyde used in the production of acetic acid and pyridine derivatives.Benzaldehyde is used in perfumes, cosmetic products, and dyes. It is added to provide almond flavour to food products and also used as a bee repellent .