What is RF Value?

The word comes from chromatography when it was discovered that a given component will always travel the same distance in a given solvent under the same conditions.

The Rf value is a physical constant for organic molecules that can be used to verify a molecule’s identity. Only if the chromatographic settings below are also constant from one trial to the next does the Rf for a substance remain constant. Because these variables are challenging to maintain consistency from experiment to experiment, relative Rf values are commonly used. “Relative Rf” denotes that the results are provided in comparison to a standard, or that the Rf values of compounds run on the same plate at the same time are compared.

The stationary phase in paper chromatography is water molecules found in the pores of the filter paper, whereas the moving phase is a solvent such as hexane, toluene, acetone, or a mixture of solvents such as methanol-water mixture. As the moving phase passes through the area where the sample has been adsorbed, it dissolves the components more or less quickly, depending on their solubility, and carries them with it as it moves across the spot.

It is possible to determine the characteristic rate of movement of each substance on the chromatography paper as the moving phase moves at a certain temperature and for a specific solvent. This is represented by the Rf value, which stands for relative front or retardation factor. Even if the mobile phase (solvent) is the same, various compounds have varying Rf values. Furthermore, the Rf value of a chemical may vary depending on the solvent. The following expression can be used to calculate Rf values:

Why do we need the RF value?

In chromatography, Rf values are the most basic prerequisite of the experiment. These numbers indicate whether the analyte (solute) prefers the stationary or mobile phase. With stationary and mobile phases, Rf values are used to determine polarity, relative masses, and relative solubilities, among other things. 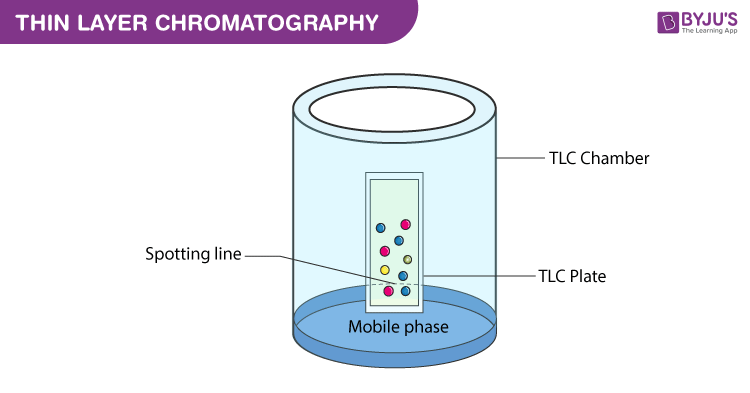 Similar retention factors indicate that the two samples may be identical, but this is not proof. The retention variables will vary slightly from sample to sample in reality. The Rf value is affected by the interactions of the various components as well as the concentration of the component in the sample. 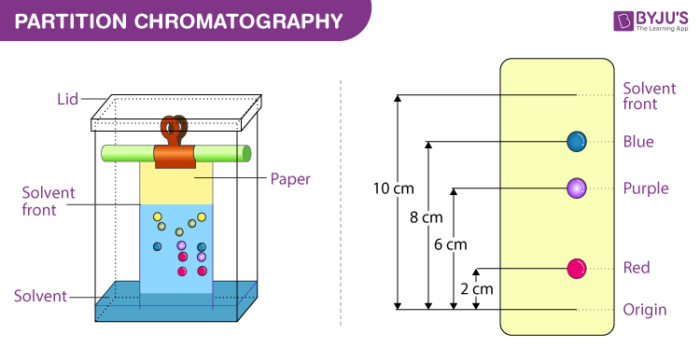 Using the stated approach and the above experiment, the Rf (retardation/retention factor) values can be computed.

On the chromatography paper, a prepared sample solution (A+B) is applied and processed through a mobile phase. Because of their differing affinities with the mobile phase, analytes (A) and (B) separate (solvent). The analytes, the solvent front, and the point where the mixture (A+B) was administered are all measured relative to each other.

Because the solvent transports the chemical along the plate, the solvent utilised has a significant impact on the chemical’s retention factor value. A solvent with a stronger interaction with a certain chemical will be able to more easily overcome the chemical’s affinity for the absorbent layer and transfer the chemical further in a given amount of time. Depending on the quantity of each solvent in a mixture, different effects can be achieved.

In some circumstances, there are a few other elements that may influence the retention factor. The temperature of the solvent and plate may make slight changes, since, the solvent can often better dissolve the chemicals it is transporting at higher temperatures. The retention factor might also be affected by the technician’s method when placing the sample on the plate. Too much sample can cause wide, diffuse bands of chemicals to move up the plate, making it impossible to correctly estimate the distance the chemical has travelled.

Can Rf value be greater than 1?

Rf values are always less than 1. An Rf value of 1 or too close to it means that the spot and the solvent front travel close together and are therefore unreliable.

How does polarity affect Rf value?

The more polar the compound, the more it will adhere to the adsorbent and the smaller the distance it will travel from the baseline, and the lower its Rf value.

Why is polarity important for chromatography?

Polarity has a huge effect on how attracted a chemical is to other substances. The larger the charge difference, the more polar a molecule is. You will find that as you increase the polarity of the solvent, all the components of the mixture move faster during your chromatography experiment.

What is the difference between polar and nonpolar molecules?