Schmidt Reaction refers to an organic chemical reaction wherein azides are reacted with the carbonyl group of a compound to give rise to amines or amides. This reaction was first reported by Karl Friedrich Schmidt in 1924.

The chemical reaction wherein amines can be produced from an azide and a carboxylic acid can be illustrated as follows:

Another example of the Schmidt Reaction is when an amide is produced from the chemical reaction between an azide and a ketone. This reaction can be illustrated as follows:

The Schmidt reaction can be used to prepare benzanilide from benzophenone and hydrogen azide. This is an example of the preparation of an amide from a ketone and an azide.

As discussed earlier, the schmidt reaction can be used to produce either amides or amines. For each of these products, a different functional group is required (ketones and carboxylic acids respectively). Therefore, the mechanisms for each of these reactions are detailed below.

This mechanism can be illustrated as follows: 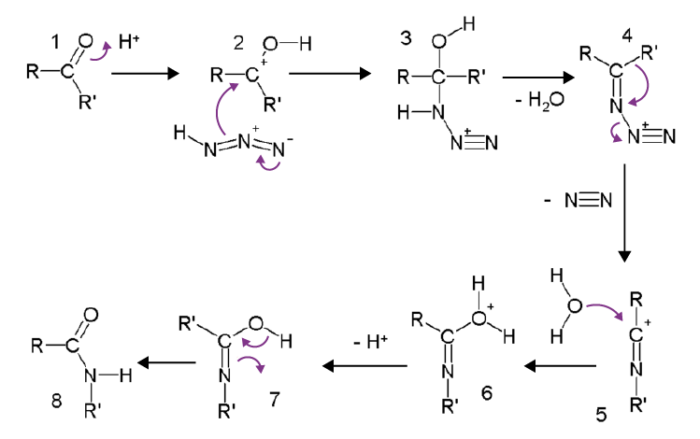 What is Schmidt rearrangement?

Schmidt reactions refer to acid-catalyzed hydrazoic acid reactions of electrophiles, such as carbonyl compounds, tertiary alcohols and alkenes. To include amines, nitriles, amides or imines, these substrates undergo rearrangement and extrusion of nitrogen.

What is reformatsky reaction explain?

The Reformatsky reaction (sometimes pronounced Reformatskii reaction) is an organic reaction that uses metallic zinc to form β-hydroxy-esters to condense aldehydes or ketones with al-halo esters. By treating an alpha-halo ester with zinc dust, the organozinc reagent, also called a ‘Reformatsky enolate’, is prepared.

Which reaction involves migration of group from carbon to nitrogen?

In which medium Favorskii rearrangement occurs?

In the case of cyclic α-halo ketones, the Favorskii rearrangement constitutes a ring contraction. This rearrangement takes place in the presence of a base, sometimes hydroxide, to yield a carboxylic acid but most of the time either an alkoxide base or an amine to yield an ester or an amide, respectively.

Which type of isomers are formed in rearrangement reaction?

The products formed have the same molecular formula, but there are different structures or bonds between their atoms. Butane and isobutane, for instance, have the same number of atoms of carbon ( C) and atoms of hydrogen (H), so their chemical formulas are the same.

The Schmidt Reaction mechanism for producing amides from ketones is illustrated above.