What is a Solid?

A solid can be defined as a substance which exists in the solid state, which is one of the four fundamental states of matter. Solids feature closely packed atoms whose kinetic energies are much lower than those of liquids and gases. All solids have rigid structures that tend to resist any external forces applied to them. Solids also are known to have a fixed, definite shape (unlike liquids and gases, which assume the shape of the container they are placed in). Furthermore, solids are also known to have a fixed, definite volume (unlike gaseous substances which expand to occupy the entire volume of the container they are placed in).

Solids do not have the ability to flow as liquids and gases do. Another dissimilarity between solids and gases is that gases can be compressed when some external pressure is applied to them, but solids are virtually incompressible. The atoms of a solid can be bound together in either a regular or an irregular manner. The manner in which the atoms of the solid are arranged in three-dimensional space determines the type of the solid. 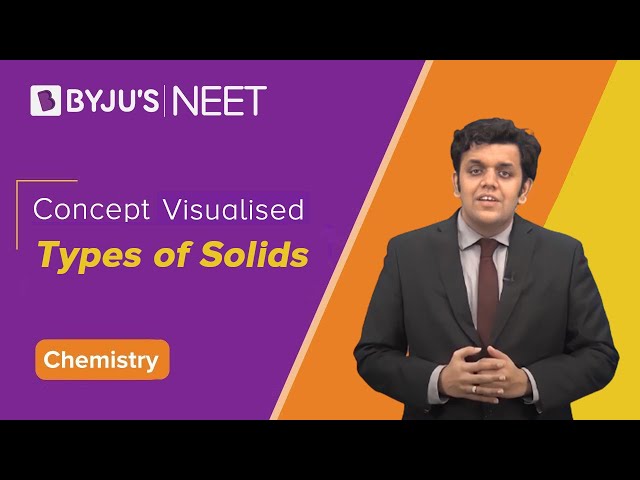 What are the two types of solids?

The two primary categories into which solids are classified are crystalline solids and amorphous solids. The former features a highly ordered arrangement of atoms in three-dimensional space whereas the latter features a network of interconnected structural blocks.

What are the differences between crystalline and amorphous solids?

What are the 7 crystal systems in which a crystalline solid can exist?

All crystalline solids can be classified into the following seven crystal systems: cubic, trigonal, tetragonal, hexagonal, monoclinic, triclinic, and orthorhombic. These crystal systems are commonly referred to as Bravais lattices.

To learn more about the definition of solids and other important concepts related to the solid state, register with BYJU’S and download the mobile application on your smartphone.

Take up a quiz on Solid definition
Q5