Zeolites are crystalline solids that are known to have well defined three dimensional structures that contain micropores in them. The regular structural frameworks of zeolites are made up of three primary components, namely oxygen, silicon, and aluminium. The micropores present in their chemical structures are known to contain water and certain cations. The chemical structures of zeolites feature a tetrahedral coordination between the aluminium atoms and the silicon atoms, which is maintained with the help of the shared oxygen atoms. The structure of zeolites (featuring a tetrahedral framework maintained by aluminium, silicon, and oxygen atoms) is illustrated below. 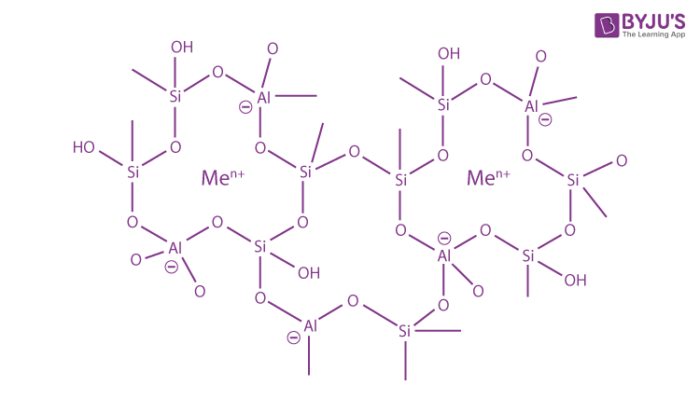 It can be noted that the composition of zeolites is similar to that of most clay minerals. For example, both mineral clays and zeolites are known to be alumino-silicate compounds. However, it is important to note that zeolites do not have the same crystal structures as most mineral clays. For example, most mineral clays feature a layered crystal structure which has the ability to swell (when water is absorbed) and shrink (when water is removed).

On the other hand, the crystalline structures of zeolites are known to be rigid in nature. These structures are known to contain a network of tiny micropores that fall in between the tetrahedral geometry. It can be noted this structure permits water to freely move in and out of these pores. Since all the micropores present at the molecular level in zeolites have similar sizes, these substances can also be employed as molecular sieves. Microporous zeolites can hold molecules of water and certain positively charged ions such as the calcium cation and the potassium cation within their pores.

The term ‘zeolite’ can be used to refer to any member of a group of hydrated minerals that contain aluminium and silicon and that also contain alkali and alkaline-earth metals. Zeolites are widely known for their ion-exchange abilities and also for their ability to undergo reversible dehydration. These aluminosilicates are known to have a framework structure which encompasses many interconnected cavities that are often occupied by metal cations (or ions that are positively charged) and water molecules.

The ease of ion and water movement within the honeycomb-like structure of zeolites enables reversible dehydration and also the exchange of cations. These properties are known to vary considerably with structural and chemical differences. The character of dehydration is known to vary with the manner in which water is bound in the chemical structure of the mineral or substance.

Dehydration is known to occur at relatively high temperatures for the zeolites in which water is tightly bound. In comparison, some of the water can be released at low temperatures when it comes to other types of zeolites which contain relatively large cavities. The exchange rate of ions is usually dependent on the size of the cavities and the number of connections between the cavities. Owing to the unique structural properties of these minerals, certain other ions are not incorporated into these systems.

Zeolites are commonly used as ion-exchange beds in the purification of water, the softening of water, and several other domestic and industrial applications. In the field of chemistry, zeolites are primarily employed to isolate molecules since it is possible for only molecules of certain sizes and shapes to move through them. Zeolites are known to serve as molecule traps that can be used to isolate certain molecules in order to analyze them.

Furthermore, zeolites can also be used as sorbents and catalysts. The well-defined pore structures of the zeolite, along with their adjustable acidity, makes them highly reactive in several categories of chemical reactions.

It can also be noted that zeolites have the ability to provide accurate and precise gaseous separations. For example, the removal of water, carbon dioxide, and sulfur dioxide from certain natural gas streams can be accomplished with the help of zeolites.

Zeolites have great potential for applications in certain lighting technologies that can supplement or even replace fluorescent lighting and light emitting diodes (LEDs). Furthermore, on-board oxygen generating systems (often abbreviated to OBOGS) and certain types of oxygen concentrators are known to employ zeolites (usually in conjunction with pressure swing adsorption) in order to remove the nitrogen present in compressed air. This is necessary for the supply of oxygen at relatively high altitudes (as required by certain air crews). It can also be noted that portable oxygen supplies and oxygen supplies for homes can also be prepared with the help of zeolites.

What are zeolites made up of?

Zeolites are structures of crystalline solids that are made up of silicon, oxygen, and aluminium. These structures form a frame with cavities and channels within which cations, water, certain relatively small molecules can reside. It can be noted that zeolites are sometimes referred to as molecular sieves as well.

Are zeolites dangerous to human beings?

Not all zeolites are toxic or dangerous to human health. However, it can be noted that certain types of zeolites are classified as carcinogens or potential carcinogens. For example, erionite, a naturally occurring fibrous zeolite, has the ability to cause the development of cancers when inhaled. However, it can be noted that there is no concrete proof that other types of zeolites can cause cancer. It can also be noted that a zeolite commodity sold in Europe under the name Vulkansandkuren has been found to contain high levels of extremely toxic heavy metals including arsenic, mercury, lead, nickel, cadmium, copper, and chromium.

What kind of heavy metals can be filtered out by zeolites?

It can be noted that certain natural zeolites have the ability to filter out lead and cadmium from certain solutions under various pH values. However, the efficiency of the zeolites in the removal of these toxic metals was found to be higher under acidic conditions (relatively low pH values).

To learn more about the structure of zeolites and their applications as chemical catalysts that help increase the rate of chemical reactions, register with BYJU’S and download the app.

Take up a quiz on structure-of-zeolites
Q5