Functional groups play a vital role in organic chemistry. The organic compound which has -OH functional group are called alcohols. Alcohols are compounds containing an -OH group bonded to a tetrahedral carbon atom. The general formula for alcohol is R-OH. Where R is an alkyl group

To identify the presence of alcoholic functional group in a given organic compound.

Any of the following test can be carried out to detect the alcoholic functional group.

It is based on the appearance of brisk effervescence due to the liberation of hydrogen gas when alcohol reacts with active metals like sodium.

The alcohol to be tested should be dry because water also reacts with sodium. Sodium should be handled carefully, unreacted sodium should be destroyed by adding excess alcohol. This test is favourable if phenyl or carboxyl groups are absent.

Note: Evolution of hydrogen gas cause a brisk effervescence indicates an alcoholic group.

Carboxylic acids reacts with alcohols forming a fruit smelling ester. The reaction between an alcohol and a carboxylic acid is called esterification. This reaction is a slow reaction catalysed by concentrated sulphuric acid.

Note: A sweet smell indicates the presence of alcoholic group.

The chemical equation is given below.

Note: The formation of white fumes indicates the presence of alcohol.

This test is given by secondary alcohols, ketones and acetaldehyde. First the compound is heated with sodium hydroxide solution and iodine. A formation of yellow precipitate of iodoform shows the presence of alcohol.

The chemical reactions are given below.

Note: The formation of yellow precipitate shows the presence of alcohol, acetaldehyde or methyl ketones.

The chemical reactions are given below. 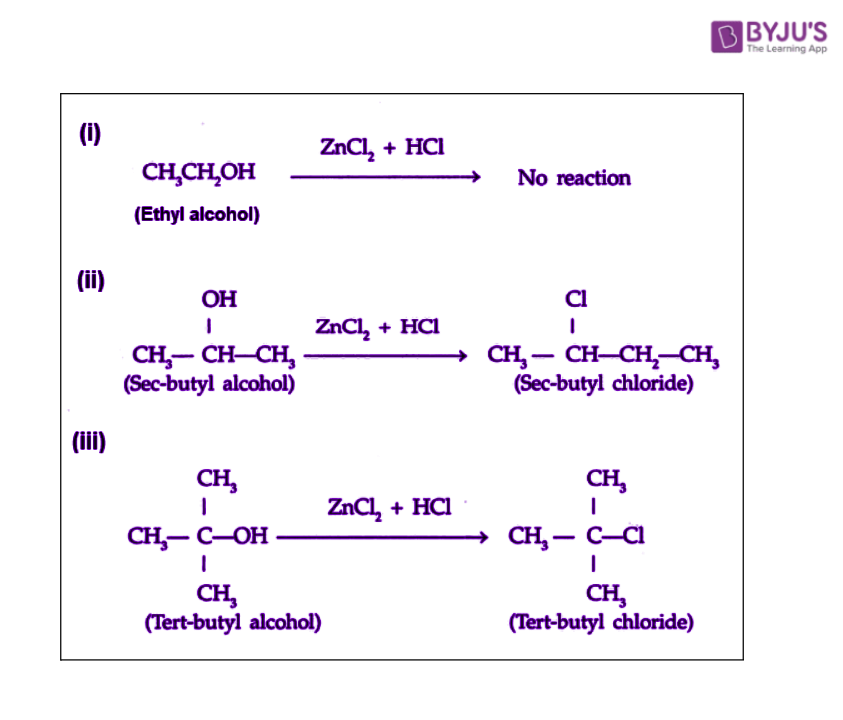 The given organic compound is ___________. (primary alcohol, secondary alcohol or tertiary alcohol)

What is Lucas reagent?

The mixture of anhydrous zinc chloride in 100ml of concentrated hydrochloric acid is called Lucas reagent.

What is the use of Lucas reagent?

Lucas ‘ reagent is a concentrated hydrochloric acid solution of anhydrous zinc chloride. Used to classify low molecular weight alcohols. The reaction is a substitution reaction where a hydroxyl group is replaced by the chloride.

Some functional groups are,

Why the given alcohol is dried completely before carrying out sodium metal test?

Alcohol is dried completely before carrying out sodium metal test because sodium itself reacts with water vigorously.

Which is more acidic and alcohol or phenol?

Alcohols are less acidic than phenols because the removal of H ion from alcohol is very difficult. Phenol can easily lose ion because the formed phenoxide ion is somewhat stabilized by resonance.

Test Your Knowledge On Test For Alcoholic Group!
Q5