Expenditure is referred to as the act of spending time, energy or money on something. In economics, it means money spent on purchasing any goods or services.

There are two categories of expenditures which are:

Revenue expenditures are the expenditures incurred for the basis other than the creation of physical or financial assets of the central government. These are associated with the expenses incurred for the normal operations of the government divisions and various services, interest payments on debt sustained by the government, and grants given to state governments and other parties (even though some of the endowments might be meant for the creation of assets). 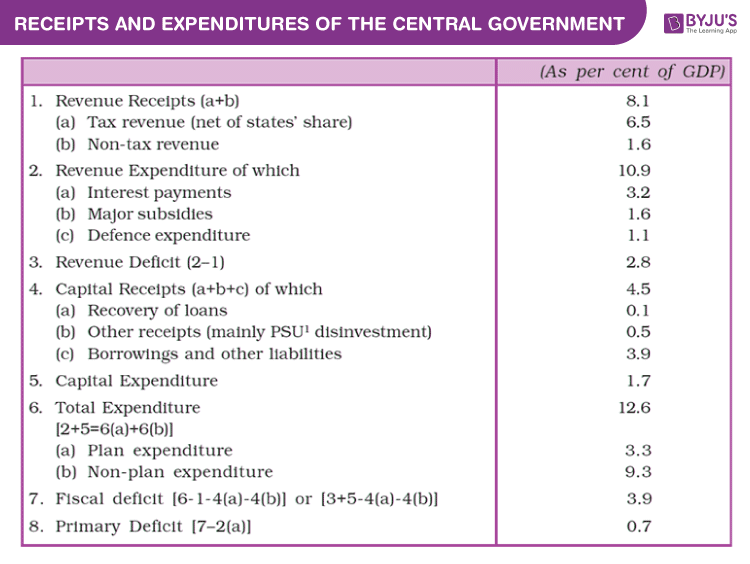 There are the expenditures of the government that result in the creation of physical or financial assets, or depletion in financial liabilities. This incorporates expenditure on the investment of building, land, equipment, machinery, investment in shares, and loans and advances by the central government to state and union territory governments, Public Sector Undertakings (PSUs), and other parties.

The Medium-term Fiscal Policy Statement sets a 3-year rolling target for specific fiscal indicators and examines whether revenue expenditure can be financed through revenue receipts on a sustainable basis and how productively capital receipts market borrowings are being consumed.

The Fiscal Policy Strategy Statement sets the preferences of the government in the fiscal sector, examining current policies and justifying any deviation in important fiscal measures. The Macroeconomic Framework Statement assesses the prospects of the economy for the GDP growth rate, the fiscal balance of the central government, and external balance.

The above mentioned is the concept that is explained in detail about Classification of Expenditure for the class 12 students. To know more, stay tuned to BYJU’S.