In business, there are situations where stakeholder loses its share because of non-payment of his share of instalment or dues. However, a company can only forfeit a share if they allow forfeiture under the Article of Association of the company.

In the event of forfeiture of shares, the shareholders loses the rights and interests of being a shareholder and ceases to be a member of the organisation.

Some shareholders might fail to pay instalments, viz., allocation of money or call money. In such a scenario : 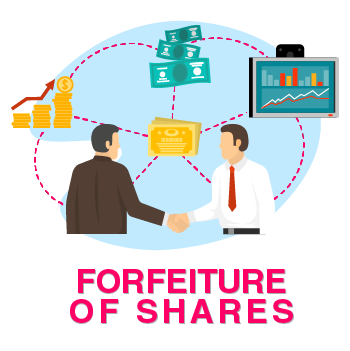 Every company according to the situation might issue the forfeited shares either at a premium or at par.

When Forfeiture of shares Issued at Par– In this situation,

You might also want to know:  The differences between Shares and Debentures

Journal entry for forfeiture of shares issued at Par :

(shares forfeited for non–payment of allotment money and calls made)

Forfeiture of Shares issued at Premium- This situation has two possibilities,

1. Securities Premium amount has been received- Here, the share capital amount is debited with the called-up amount and then it will be credited to Shares Allotment (amount not received on allotment), Forfeited Shares ( received amount with less premium), Final Call Account, and First Call.

Do you know: What Is Partnership?

Journal entry for forfeiture of shares issued at Premium :

Quick link: What Are Current Assets?

Forfeiture of Shares issued at discount: Shares that are issued initially at discount and then forfeited. Such discount must be written off and an adjustment entry needs to be passed. In this case discount applicable on forfeited shares is written back by crediting the Discount on Issue A/c.

Following journal entries can be passed:

The above mentioned is the concept, that is elucidated in detail about Forfeiture of Shares for the Class 12 Commerce students. To know more, stay tuned to BYJU’S.