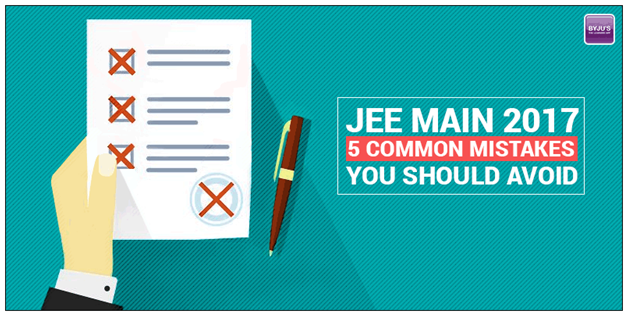 In an attempt to sharpen the blade most of us end up breaking it by applying too much pressure or the wrong amount of it. Similarly, during exams like JEE Main’s, students end up making silly mistakes that end up costing them a seat in their dream institution. In order to avoid your dream turning into a nightmare, it is vital that you implement the right technique and method.

Application of wrong methods during preparation will not only affect your performance and increase stress but also affect your progress. In preparation for an important exam like JEE MAIN 2017, you must make sure that every step you take is towards success. The best and the brightest often fail to make to the best institutes in the country because of their mistakes during preparation. Most of the students are unaware of the things they should and shouldn’t be doing.

5 Common Mistakes That Candidates Should Avoid

Let us take a look at five common mistakes that you should avoid while preparing for your JEE Main or even JEE Advanced.

Students tend to refer to all sorts of study material in the hope of covering every aspect of the syllabus. But this is the most basic mistake made by students. During the exam, students will realize that more than 75% of questions they come across in the exams are from NCERT. Students must make a note to cover everything in the NCERT course books before referring to any other material. Make sure to revise topics from class XII and XI syllabus as they constitute a major amount of the JEE portion.

As exams approach, we tend to become victims of a monotonous routine of waking up, studying, giving tests, eating, sleeping and then the same cycle. This is exactly what you must avoid. Make sure you study according to your convenience, it doesn’t mean you flip through your books the entire day. Make a habit of studying intelligently and in short periods to avoid monotony.

Students more often tend to study their favourite topics in which they are strong and look to strengthen it even more. But in the whole process, they avoid the other important topics of JEE. The most intelligent thing for students to do should be covering all the topics of JEE syllabus instead of your favorite one.

Relying Too Much On Coaching Centre’s

With all their sophistication, teaching methods and knowledgeable faculty, coaching centre’s lack the simplicity and understanding you get from reference books. Students tend to follow their coaching centre’s classes blindly and over emphasize their notes and modules.

Lack Of Confidence And Laziness During The Preparation

It happens to the best of the best but it is avoidable. During preparation, students tend to ignore the hard questions without even making an effort to solve it. There is enough time before JEE where you can explore your mind and prepare accordingly. So work on the tough questions instead of shying away from them due to lack of confidence. It is vital to show attention and confidence while preparing for your JEE exams.