Electrolysis of sodium chloride is an important process to manufacture many bulk chemicals of commercial utility, like chlorine, sodium hydroxide etc. Sodium chloride is electrolyzed either in a molten state or in aqueous solutions. Electrolysis is, also done in the presence of additional salts to aid the redox reactions. 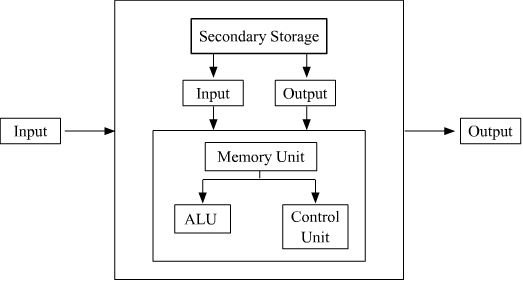 Down’s Process: Sodium chloride melts at a very high temperature of 801°C. Addition of anhydride calcium chloride in the ratio of CaCl2: NaCl = 3:2 reduces the melting point to 580°C. Electrolysis is done with an iron cathode and graphite anode and iron gauze preventing the mixing of products chlorine and sodium. The products of molten sodium chloride are sodium metal and chlorine gas.

Two competing reactions are possible at both cathode and anode. At Cathode: reduction reaction: at pH =7

Water can be reduced to hydrogen gas or Sodium ions reduced to sodium metal.

At anode: Oxidation reaction: at pH =7. Water can be oxidized to oxygen or chloride ion oxidized to chlorine molecule.

Hence, the product of electrolysis of aqueous sodium chloride can be anything between,

i) sodium metal, or hydrogen gas at the cathode and

ii) chlorine or oxygen gas at the anode,

Water has very low conductivity and the small amount of ionic sodium chloride helps the ionic conductivity of the solution. In small concentration, the electrolysis of water becomes more predominant yielding hydrogen at cathode and oxygen at the anode.

Net reaction of electrolysis of very dilute aqueous sodium chloride is given as;

b) High Concentration of Sodium Chloride

At Cathode: reduction reaction: at pH =7

Reduction (over) potential of water being more positive than the reduction of sodium ions, water is decomposed to liberate hydrogen at the cathode.

At anode: Oxidation reaction: at pH =7

The thermo-dynamical reduction potential of water and chloride is +0.82V and 0.1.36V respectively. Oxidation of water being more positive is more feasible and so, the evolution of oxygen gas should happen at the anode. But, the evolution of oxygen from water has an overvoltage of -0.6V making the voltage for the oxidation of water as -1.4V. Chloride oxidation is more positive than the net voltage of water oxidation. So, chloride is, oxidized to chlorine at the anode. The net reaction taking place is given as;

The overall reaction is as follows;

At high salt concentration, hydrogen and chlorine is the product of electrolysis with sodium hydroxide as a by product.

Brine, added to the end compartment is, electrolyzed to sodium and chlorine. While chlorine escapes at the top of the cell, sodium forms sodium amalgam with mercury at the bottom. Sodium transferred to the central compartment reacts with water to form sodium hydroxide and hydrogen.

Mercury used in the Caster-Kellner process contaminates the products and is an environmental hazard due to sublimation. Mercury being carcinogenic is eased out for the electrolysis of aqueous sodium chloride.

Presently all the Chlor-alkali industries producing chlorine and sodium hydroxide uses a semipermeable membrane ‘Nafion’ to separate the anode and cathode compartments. 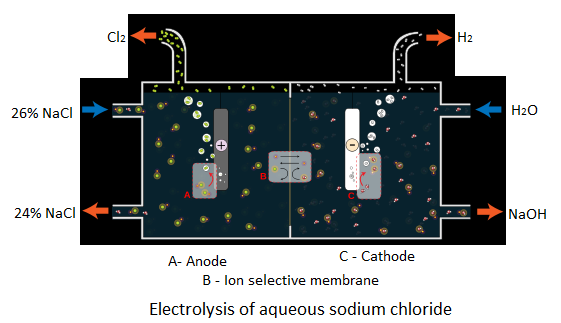 Nafion is a sulfonated ionic tetra fluoro-ethylene copolymer. The membrane allows the sodium ion to flow across the membrane into the cathode cell. Additional reinforcing with other semipermeable membrane prevents any back mixing of incoming chloride and hydroxide ions across, Nafion.

So, the net reaction is;

What are the products of the electrolysis of sodium chloride?

The products of electrolysis of sodium chloride are hydrogen gas, chlorine gas and sodium hydroxide solution.

What is the positive electrode called in electrolysis?

The positive electrode is called an anode in electrolysis.

What is the negative electrode called in electrolysis?

The negative electrode is called cathode in electrolysis.

Why is DC used in electrolysis?

What is Faraday’s formula for electrolysis?

Faraday’s formula for electrolysis is given by:
w = ZIt
where, w = amount of substance produced at the electrode
Z = electrochemical equivalent of a substance
I = current in amperes
t = time in seconds
Test Your Knowledge On Electrolysis Of Sodium Chloride!
Q5