Electrochemistry is the subdiscipline of chemistry that deals with the study of the relationship between electrical energy and chemical changes. Chemical reactions that involve the input or generation of electric currents are called electrochemical reactions. Such reactions are broadly classified into two categories:

Electricity can be produced when electrons move from one element to another in certain types of reactions (such as redox reactions). Typically, electrochemistry deals with the overall reactions when multiple redox reactions occur simultaneously, connected via some external electric current and a suitable electrolyte. In other words, electrochemistry is also concerned with chemical phenomena that involve charge separation (as seen commonly in liquids such as solutions). The dissociation of charge often involves charge transfer that occurs homogeneously or heterogeneously between different chemical species.

A spontaneous chemical process is the one which can take place on its own and in such a process Gibbs free energy of a system decreases. In electrochemistry, spontaneous reaction (redox reaction) results in the conversion of chemical energy into electrical energy. The reverse process is also possible where a non-spontaneous chemical reaction occurs by supplying electricity. These interconversions are carried out in equipment called electrochemical cell.

For example- Daniell cell is a galvanic cell in which zinc and copper are used for a redox reaction to take place.

At anode (oxidation half)

At cathode( reduction half) 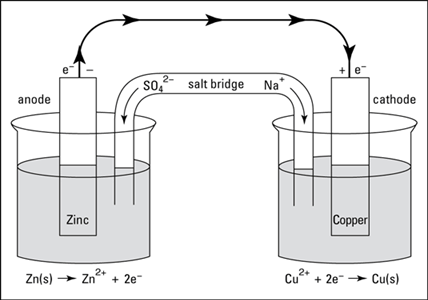 Salt bridge: Salt bridge is usually an inverted U- tube filled with a concentrated solution of inert electrolytes. It is used to maintain the charge balance and to complete the circuit by allowing the flow of ions through it. It contains a gel in which inert electrolytes like KNO3 or K2SO4 are mixed. Through the salt bridge, negative ion flows towards the anode and positive ion flow to the cathode and the charge balance is maintained and cell keeps on functioning. 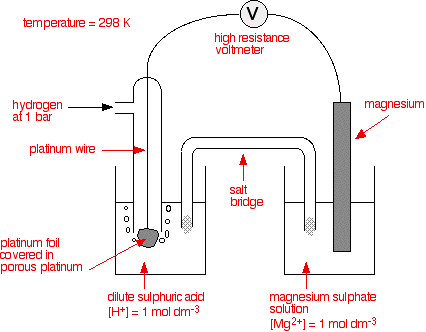 A series of the standard electrode has been established by measuring the potential of various electrodes versus standard hydrogen electrode(SHE). When the electrodes (metals and non-metals) in contact with their ions are arranged on the basis of the values of their standard reduction potential or standard oxidation potentials, the resulting series is called the electrochemical series. 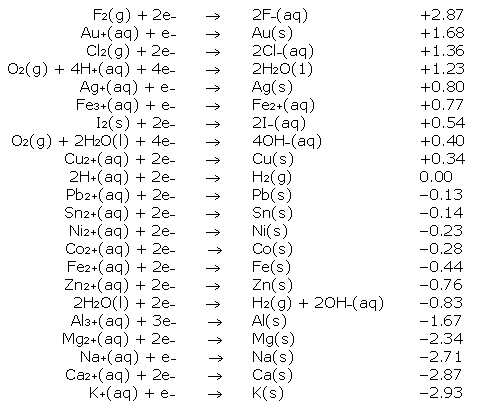 If Eocell is positive then the reaction is feasible.

If Eocell is negative then the reaction is not feasible.

Electrode and cell potentials- Nernst equation: The electrode potential and the emf of the cell depends upon the nature of the electrode, temperature and the activities( concentrations) of the ions in solution.

For the general electrochemical reaction of the type:

The electrolytic cell converts electrical energy to chemical energy. Here the electrodes are dipped in an electrolytic solution containing cations and anions. On supplying current the ions move towards electrodes of opposite polarity and simultaneous reduction and oxidation take place.

● Sodium-ion migrates to the cathode, where sodium ion gains one electron and reduce to sodium metal.

● Chloride ions migrate towards the anode where it loses one electron and gets oxidised to chlorine gas. Preferential discharge of ions: When there are more than one cations or anion the process of discharge becomes competitive in nature. For example, in the electrolysis of NaCl solution, apart from Na+ and Cl–ions the solution of sodium chloride also contains H+ and OH– ions due to ionisation of water. When the potential difference is applied between the two electrodes, Na+ and H+ ions move towards the cathode and Cl– and OH– ions move towards the anode. At cathode H+ ions get reduce in preference to giving hydrogen gas because hydrogen has a higher reduction potential than sodium. Similarly, at the anode, Cl– ions are oxidised in preference to OH– to give chlorine gas. 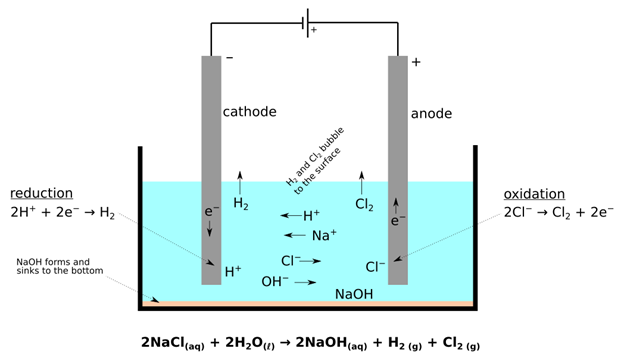 The relationship between the quantity of electric charge passed through an electrolyte and the amount of substance deposited at the electrodes was given by Faraday in 1834, in the form of the law of electrolysis.

If W is the mass of the substance deposited by passing Q coulomb of charge then according to this law:

Where Z is a constant known as electrochemical equivalent and is characteristic of a substance deposited.

When the same quantity of charge is passed through different electrolytes, then the mass of different substance deposited at the respective electrodes will be in the ratio of their equivalent masses.

Mathematically it is represented as;

Which of the following reactions under standard condition will not take place in the specified direction.

Option a and c

Reaction is not feasible (negative Eocell)

Reaction is not feasible ( negative Eocell)

3. The solution of metal of atomic mass X was electrolyzed for 1 hour with a current of 0.25 ampere. The mass of metal deposited was 0.295g. Find the metal X if its valency is 2.

Therefore, the metal X is copper. 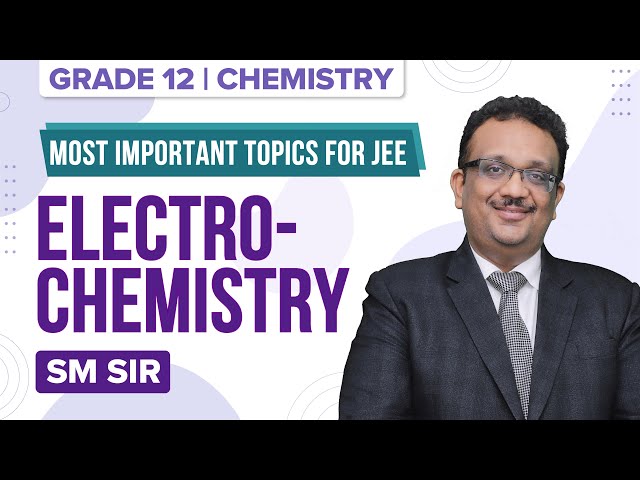 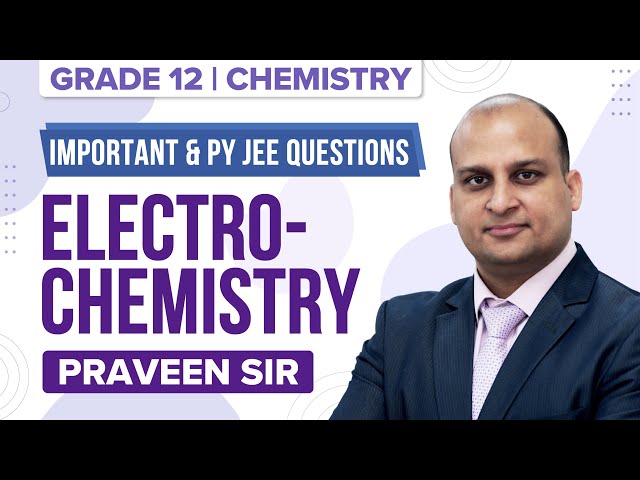 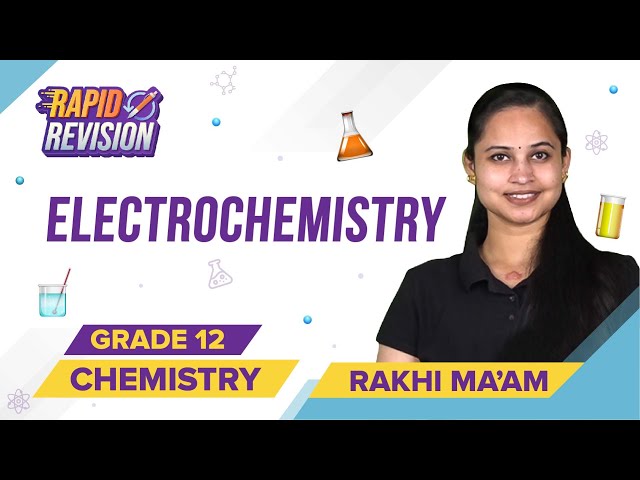 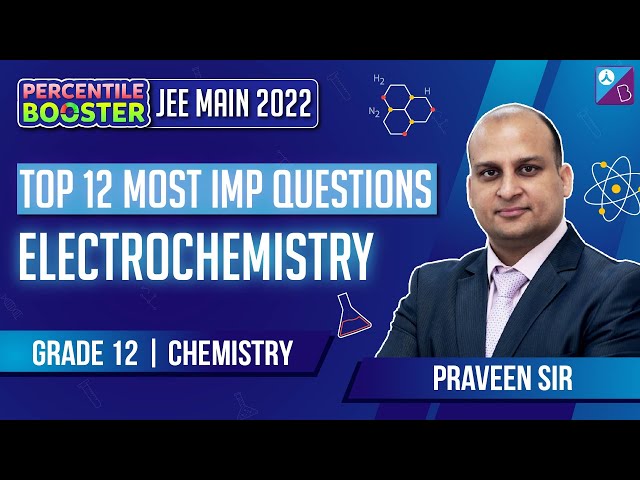 1. Explain the function of a galvanic cell?

2. How does electrolytic cell works?

3. What is a half cell or electrode?

It is a metal used to conduct electrons in a cell.

4. What is cell potential?

In a cell, the potential difference between the two electrodes is called cell potential.

Electrochemical series: The various elements are arranged in the increasing order of standard reduction potential.

Test your knowledge on Electrochemistry
Q5