What is Salt Bridge?

A salt bridge is a device used in an electrochemical cell for connecting its oxidation and reduction half cells wherein a weak electrolyte is used. In other words, a salt bridge is a junction that connects the anodic and cathodic compartments in a cell or electrolytic solution.

The salt bridge usually consists of a strong electrolyte which is further made up of ions. For example, AgNO3, KCl, etc. Salt bridges are generally used in a galvanic cell such as a voltaic cell or Daniel cell.

The main function of a salt bridge is to help maintain the electrical neutrality within the internal circuit. It also helps in preventing the cell from taking its reaction to equilibrium. If salt bridges are absent or if they are not used then the reaction will likely continue and the solution in one-half electrodes will gather a negative charge. Similarly, in the other half, electrodes would accumulate a positive charge. This will further result in the stoppage of the reaction and no electricity will be produced. 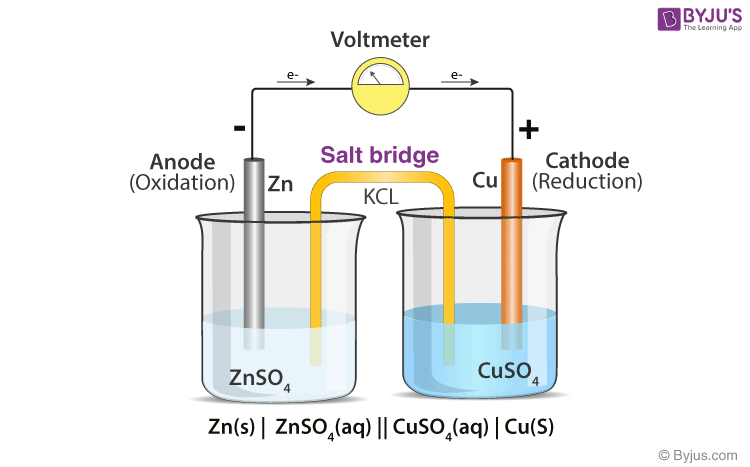 Therefore, a salt bridge basically helps in preventing the accumulation of positive and negative charges around the respective electrodes and further allowing a smooth reaction to take place. It also helps in the continual flow of electrons. However, the purpose of a salt bridge is not to move electrons from the electrolyte; rather it’s to maintain charge balance because the electrons are moving from one-half cell to the other.

There are mainly two types of salt bridges used in electrochemical cells.

As stated above, a salt bridge’s main function is to maintain the electrical neutrality between two beakers. To do so the salt used must be inert. The ions need to move to and forth between the two half cells. Unlike other salts, potassium chloride (KCl) and potassium nitrate (KNO3) are better inert salts. An inert salt is used to prevent the reactions from occurring between the salt and solution. The inert salt potassium chloride (KCl) is a commonly used salt because the potassium and chloride ions have very common diffusion coefficient and minimizing junction potential, but the potassium chloride is unwise to use as electrolyte when the electrode used is lead or silver because they form a precipitate.

Like in the electrochemical cell, salt bridges have the same function in electrolytic cells too. If we immerse the two electrodes in one solution in a single container, no salt bridge is necessary, but if we want each electrode in a different solution and in separate containers, we need a salt bridge to complete the circuit. It contains mobile ions that act as charge carriers.

Soaking String, Cotton, or Paper Material in an Electrolyte Solution

For preparing a bridge, take material that is large enough to reach two beakers. Place this material in a pool of electrolyte until they get saturated with the solution. Carefully take the material from the electrolytic solution and remove the excess amount of electrolyte.

Preparing Gel to Function as Bridge

The gel is suspended in an electrolytic solution, and they are treated with a buffered solution and heated later. The viscous gel is allowed to set on a glass plate or tube

The oxidations that occur in anode generate electron and positive ions. Now the electrons flow through the wire leaving the unbalanced positive charge in a beaker. In order to maintain the electrical neutrality the negatively charged (NO3–) ion moves to the positively charged beaker (anodic half cell). 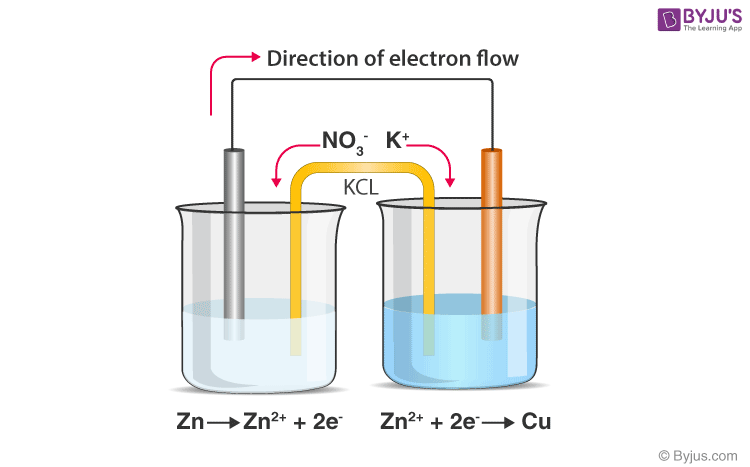 What happens if No Salt Bridge is used in a Galvanic Cell?

What is a salt bridge?

A salt bridge is a strong electrolyte that facilitates the flow of ions between oxidation and reduction half-cells.

What is the main function of a salt bridge?

The main function of a salt bridge is to maintain electrical neutrality in the cell and minimize liquid junction potential.

Which electrolytes are generally used as a salt bridge?

KCl and AgNO3 are generally used as salt bridges.

What are the two types of salt bridges used in electrochemical cells?

The glass tube bridge and Filter paper bridge are the two types of salt bridges used in electrochemical cells.
Test Your Knowledge On Salt Bridge!
Q5