HC Verma Solutions for class 11 chapter 4 – the forces are available for physics students who may be having trouble in understanding and solving problems related to the chapter. By preparing for physics topics like these, students are also simultaneously preparing themselves for the IIT JEE exams as well. The HC Verma Solutions vol 1 for chapter 4 explains the topics about the different forces that are occurring in our world around us. Important topics such as the force of gravitation, the force of attraction are some of the important forces that govern the laws of physics here on planet Earth. With the help of these solutions, students learn about the different forces that govern our universe. Students can also increase their problem-solving efficiency by referring to the solved examples and practising them. This chapter also teaches students about interesting concepts which are utilised in the numerical problems such as Mass of Earth, Weight of Earth, Mass of Satellite, Radius of Earth, Coulomb’s Force etc.

Some of the main topics discussed in this chapter are:

Question 1: The gravitational force acting on a particle of 1g due to a similar particle is equal to 6.67 × 10–17 N. Calculate the separation between the particles.

Separation between the particles is 1 m.

Question 2: Calculate the force with which you attract the earth.

Let m be the mass of the man standing on earth, the earth’s gravitational force will act on man mg.

Man is also attracting the earth with a force of 500 N.

Question 3: At what distance should two charges, each equal to 1 C, be placed so that the force between them equals your weight?

Coulomb’s force of attraction between two charges is given by –

Force of attraction is equal to the weight (Given)

Question 4: Two spherical bodies, each of mass 50 kg, are placed at a separation of 20 cm. Equal charges are placed on the bodies and it is found that the force of Coulomb repulsion equals the gravitational attraction in magnitude. Find the magnitude of the charge placed on either body. 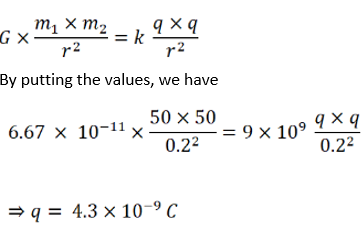 Question 5: A monkey is sitting on a tree limb. The limb exerts a normal force of 48 N and a frictional force of 20 N. Find the magnitude of the total force exerted by the limb on the monkey.

The resultant magnitude of the force, say R,

Question 6: A body builder exerts a force of 150 N against a bullworker and compresses it by 20 cm. Calculate the spring constant of the spring in the bullworker.

Question 7: A satellite is projected vertically upwards from an earth station. At what height above the earth’s surface will the force on the satellite due to the earth be reduced to half its value at the earth station? (Radius of the earth is 6400 km)

Also assume, at height h, the force on the satellite due to earth is reduce to half.

Question 8: Two charged particles placed at a separation of 20 cm exert 20 N of Coulomb force on each other. What will be the force if the separation is increased to 25 cm?

The force between moon and earth:

Question 10: Find the ratio of the magnitude of the electric force to the gravitational force acting between two protons. 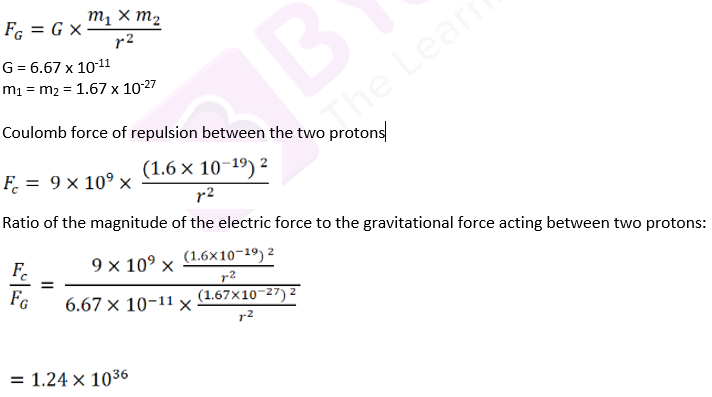 The average separation between the proton and the electron of a Hydrogen atom in ground state, r = 5.3 × 10−11 m

(a) Coulomb’s force of between electron and proton

(b) the Coulomb force when the average separation between the proton and the electron increases to four times its value in the ground state:

Also given, geostationary orbit of the earth is at a distance of about 36000 km from the earth’s surface. 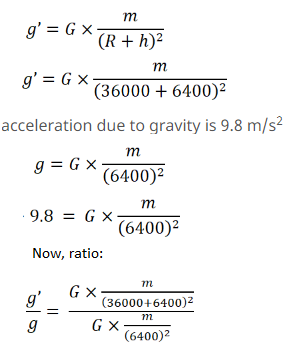