HC Verma Solutions Class 12 Chapter 23 Semiconductor and Semiconductor Devices can be used as a source of background information on topics where student’s might lack proficiency such as finding the number of conduction electrons, holes, unoccupied states in semiconductors etc. The solutions are mainly designed for class 12 students and cover the complete JEE Physics topics as well as the exercises discussed in the chapter. Some of the common questions asked in this unit are;

The whole idea behind preparing and offering the solutions is to help students get familiar with the question-solving pattern and integrate them into their study activities. With the solutions, students will further get an insight into important topics and understand them more clearly in the process. Students can use the solutions to also prepare well for competitive exams like JEE.

1. If the conduction band of a solid is partially filled at 0 K then which category will it belong to. Will it be a semiconductor, a conductor or an insulator?

2. When we increase the temperature of the junction the drift current in a reverse-biased p-n junction also increases in magnitude. On the basis of creation of hole-electron pairs can you explain why and how this occurs?

4. What condition will you find a p-type semiconductor always in?

5. When will the diffusion current in a p-n junction be greater than the drift current in magnitude?

Question 1: Calculate the number of states per cubic metre of sodium is 3s band. The density of sodium is 1013 kg m-3. How many of them are empty?

In N atoms of sodium there will be 2N states possible states and N states will be empty.

As atomic number of sodium = 11

Question 3: Indium antimonide has a band gap of 0.23 eV between the valence and the conduction band. Find the temperature at which kT equals the band gap.

(a) Find the ratio of the band gap to kT for silicon at room temperature 300 K.

(b) At what temperature does this ratio become one tenth of the value of 300 K? (Silicon will not retain its structure at these high temperatures)

The electron was at the top of the edge of valance band and reaches acceptor level on receiving the energy given.

Energy gap between the acceptor level and valence band must be 2kT.

For the electron to move from the conduction band to valance band will have to lose energy same as the energy band gap of ZnO OR The max energy released in this process will be equal to the band gap of the material.

Question 7: Suppose the energy liberated in the recombination of a hole-electron pair is converted into electromagnetic radiation. If the maximum wavelength emitted is 820 nm, what is the band gap?

Question 8: Find the maximum wavelength of electromagnetic radiation which can create a hole-electron pair in germanium. The band gap in germanium is 0.65 eV.

Which is required wavelength.

Question 9: In a photodiode, the conductivity increases when the material is exposed to light. It is found that the conductivity changes only if the wavelength is less than 620 nm. What is the band gap?

Maximum wavelength at which the conduction starts = 620 nm

and this wavelength provides minimum energy to the electron to move to conduction band.

we know, Energy of this radiation = Energy band gap

Which is the required band gap.

Let ΔE1 and ΔE2 be the energy band gap for silicon and diamond.

Also, we are given that, population of conduction electrons (and of the holes) is roughly proportional to e–ΔE/2kT. 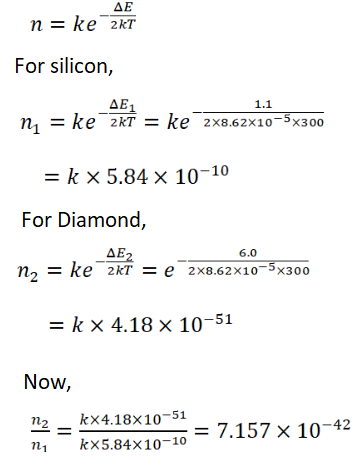 Because of more band gap, there will be almost zero conduction electrons will be there in the diamond. 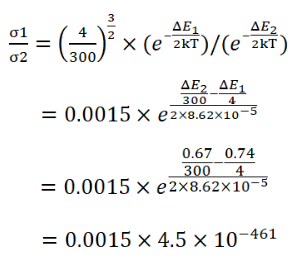 Which shows that conductivity increases by the factor 10463.

Question 12: Estimate the proportion of boron impurity which will increase the conductivity of a pure silicon sample by a factor of 100. Assume that each boron atom creates a hole and the concentration of holes in pure silicon at the same temperature is 7 × 1015 holes per cubic meter. Density of silicon is 5 × 1028 atoms per cubic meter.

[As number conduction electron and holes are the same]

Solving above equation for y, we get

Product of concentration of conduction electron and that of holes remains constant.

Let nh be the Concentration of holes.

As per question, 2×1023 be the concentration of conduction electron after doping. And

6 x 1019 be the concentration of conduction electron before doping.

Let the conductivities at temperatures T1 and T2 be σ1 and σ2 respectively.

Given T1 = 300K and T2 = temperature at which the conductivity is double of its value at T1. 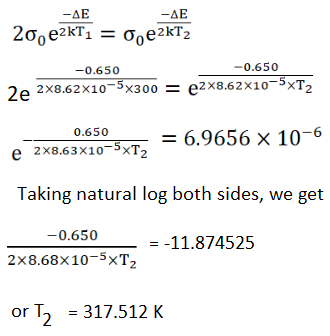 Question 15: A semiconducting material has a band gap of 1 eV. Acceptor impurities are doped into it which create acceptor levels 1 meV above the valence band. Assumed that the transition from one energy level to the other is almost forbidden if kT is less than 1/50 of the energy gap. Also, if kT is more than twice the gap, the upper levels have maximum population. The temperature of the semiconductor is increased from 0K. The concentration of the holes increases with temperature and after a certain temperature it becomes approximately constant. As the temperature is further increased, the hole concentration again starts increasing at a certain temperature. Find the order of the temperature range in which the hole concentration remains approximately constant.

A semiconducting material has a band gap of 1 eV. Acceptor impurities are doped into it which create acceptor levels 1 meV above the valence band.

Given Condition 1: Any transition from one energy level to the other is almost forbidden if kT is less than 1/50 of the energy gap.

T1 be the upper limit for temperature over which transition becomes a forbidden transition.

Given Condition 2: If kT is more than twice the gap, the upper levels have maximum population.

(a) Find the height of the potential barrier (b) What should be the minimum kinetic energy of a conduction electron which can diffuse from the n-side to the p-side.

(a) We know the relation between electric field and potential,

(b) Minimum K.E. = Potential barrier x charge on an electron

Question 17: The potential barrier existing across an unbiased p-n junction is 0.2 volt. What minimum kinetic energy a hole should have to diffuse from the p-side to the n-side if

(a) the junction is unbiased,

(b) the junction is forward biased at 0.1 volt and

(c) the junction is reverse biased at 0.1 volt?

K.E. of the hole will decrease.

(b) A junction will act like reverse biasing, when the hole approaches the junction from n-side

K.E. of the hole in this case will increase.

Question 19: When a p-n junction is reverse biased, the current becomes almost constant at 25 μA. When it is forward biased at 200 mV, a current of 75 μA is obtained. Find the magnitude of diffusion current when the diode is

When a p-n junction is reverse biased, the current becomes almost constant at 25 μA. When it is forward biased at 200 mV, a current of 75 μA is obtained.

(a) When the diode is unbiased,

(b) When the diode is reverse biased, then diffusion current = 0

Question 20: The drift current in a p-n junction is 20.0 μA. Estimate the number of electrons crossing a cross section per second in the depletion region.

where, Nh = Number of holes crossing a cross section per second

Ne= Number of electrons crossing a cross section per second

Without any biasing applied on the junction, Nh = Ne = N