What is Convex Mirror?

A convex mirror is a type of spherical mirror in which the reflecting surface is the bulged out portion of the sphere, i.e. in this type of mirrors the reflecting surface bulges out towards the incident light source. Because of their shape the incident light is reflected outwards (diverged), thus they are also called diverging mirrors and thus they are not used for focusing light.

Convex mirrors always form virtual images. This is because the focal point and the centre of curvature of the convex mirror are imaginary points and that cannot be reached. So the image is formed inside the mirror and cannot be projected on a screen. The image formed look smaller than the object from a distance but it gets larger as the object is brought closer to the mirror. 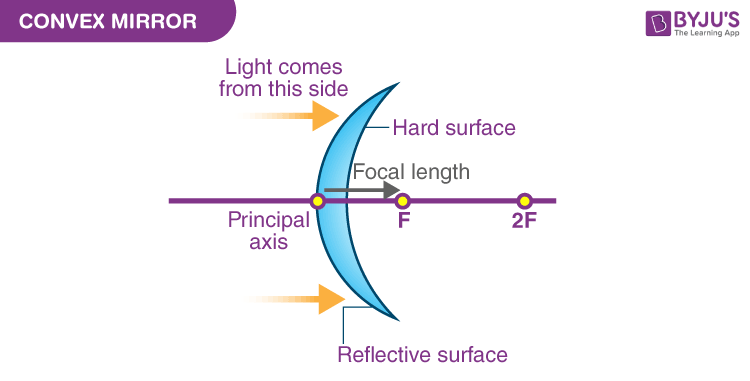 1. Pole: It is the centre of the reflecting surface of a spherical mirror. It lies on the surface of the mirror and it is usually denoted by P.

3. Radius of curvature: It is the radius of the sphere formed by the reflecting part of the sphere. It is represented by R.

4. Principal axis: It is the straight-line parring through the pole and centre of curvature of the spherical mirror. This is normal to the mirror at its pole.

6. Focal length: It is the distance between the pole and the principal focus of the mirror. It is denoted by f.

Ray diagrams are necessary for understanding the formation of an image by a convex mirror. For constructing ray diagrams and to learn the image formation, we should consider at least two incident rays coming from the object.

The intersection of these two reflected rays gives the position of an image of the object. In case of a convex mirror any of the following four ray diagrams can be used for locating the image formed:

a) When the ray is parallel to the principal axis. After reflection, the rays appear to diverge from the principal focus of a convex mirror.

b) When a ray is directed towards the principal focus of a convex mirror, after reflecting it will emerge parallel to the principal axis.

c) When a ray is directed in the direction of the centre of curvature of a convex mirror the rays will be reflected along the same path. This occurs because the incident rays fall on the mirror along the normal to the reflecting surface.

Rays emerging from a point actually meet at another point after reflection, and that point is called the image of the first point. The image is real if the rays converge to the point and it is virtual if the rays do not meet it but appear to diverge from a point when the rays are produced backwards.

During image formation we assume that the rays are paraxial, i.e., they are incident at points close to the pole P of the mirror and make small angles with the principal axis. For a convex mirror, we consider two positions of the object before the mirror.

For the image formation by a convex mirror in this condition, we consider two rays parallel to the principal axis and one directed towards the pole of the mirror originating from the object. These rays after reflection form an image at F, the principal focus of the mirror, which is behind the convex mirror. The image thus formed is highly diminished, virtual and erect.

When The Object is Placed Between Infinity and Pole

In this situation of the image formation by a convex mirror, we consider two different rays emerging from the object. One parallel to the principal axis and the other directed towards the centre of curvature of the mirror. These rays after reflection form an image between the pole (P) and the focus (F) behind the mirror. The image thus formed is diminished, virtual and erect.