You can learn about electric current by following the attached link. Meanwhile, students can also check the important formulas for this topic below.

n is the number of free electrons per unit volume

A is the area of cross-section

e is the charge of the electron

Vd is the drift velocity

i is the current

A is the cross-sectional area

E is the electric density

σ is the conductivity

4. Resistance of the wire

ρ is the resistivity

σ is the conductivity

R0 is the original resistance

R is the resistance at temperature T

α is the temperature coefficient of resistance

V is the voltage

I is the current

R is the resistance

(i) Junction Law: The algebraic sum of all the currents directed towards a node is zero.

(ii) The Loop Law: The algebraic sum of all the potential difference along a closed loop in a circuit is zero. 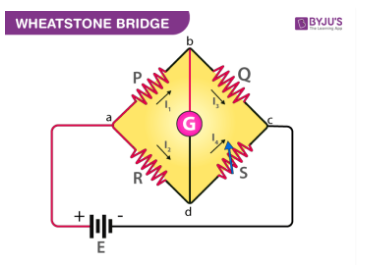 In a balanced Wheatstone bridge

12. Galvanometer as an Ammeter

S is the shunt resistance

i is the maximum current measured by the ammeter

ig is the maximum current passed through the galvanometer

13. Galvanometer as a Voltmeter

Ig is the maximum deflection of galvanometer

R is the high resistance connected in series

Tn is the neutral temperature

Ti is the inversion temperature

T0 is the temperature of the cold junction

a and b are the parameters of the materials used

The mass deposited is

Where, i is current, t is the time

E is the chemical equivalent

Up Next: Important Gravitation Formulas for JEE

Test Your Knowledge On Important Current And Electricity Formulas For Jee!
Q5