What Are Different Types Of Ligands?

A ligand is an ion or molecule, which donates a pair of electrons to the central metal atom or ion to form a coordination complex. The word ligand is from Latin, which means “tie or bind”. Ligands can be anions, cations, and neutral molecules. Ligands act as Lewis bases (donate electron pairs) and central metal atoms viewed as Lewis acid (electron pair acceptor). The nature of bonding between metal to ligand varies from covalent bond to ionic bond.

Monodentate ligands are also called “one-toothed“ because they bite the metal atom only in one place.

Lewis base which donates two lone pairs of electrons to the central metal atom is known as bidentate ligands. They are often referred to as a “chelating ligands”. The complex which contains chelating ligands is called “Chelates”. 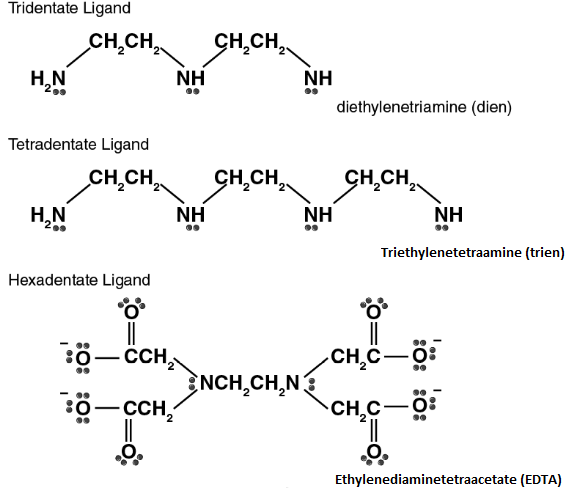 Ligands with more than one potential donor atoms are known as ambidentate ligands. For example, thiocyanate ion(NCS–) which can bind to the central metal atom or ion with either nitrogen or sulfur atoms.

Bridging ligands is the one which is bound to more than one metal atom.

Bridge ligand is preceded by “mu, \eta “ which relates to hapticity. List of bridging ligands are as follows:

Organic ligands – A organic derivatives of above mentioned inorganic ligands and they forms a strong bridge between metal centers.

Note: Hapticity is the number of atoms of the ligand, which are bound to the central metal atom.

1. EDTA is what type of ligand?

EDTA is an example of hexadentate ligands. It bindes four times at oxygen atom and twice at nitrogens. EDTA is usually used in the form of salt or dry form. EDTA is a great chelating agent which forms multiple bonds in coordination compounds.

2. Is NH3 is an example of monodentate ligand?

Dioxygen complexes are an example of coordination compounds which contain O2 as a ligands. Many transition metal form complex with O2.

Test Your Knowledge On Ligands!
Q5