Maltose which is also known as malt is a disaccharide made up of two alpha D glucose unit. The two-unit of glucose are linked with an alpha 1,4 glycosidic bond. In the small intestinal lining in humans, the enzyme maltase and isomaltase break down the molecules of maltose into two glucose molecule, which is then absorbed by the body. Starch is the most abundant polysaccharide in plant cells after cellulose. 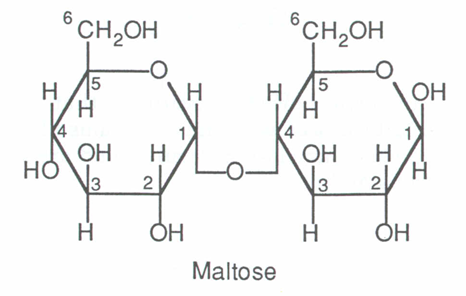 At C1 of the second glucose unit, aldehyde group can be formed in solution which makes maltose a reducing sugar.

The first discovery of maltose was made by Augustin-Pierre Dubrunfaut. However, this was not widely accepted. It was only in the year 1872 that its existence was confirmed by Irish chemist named Cornelius O’Sullivan. The term maltose has been taken from the word malt where a suffix ‘ose’ was added describing that it belonged to the category of sugar.

Maltose belongs to an important biochemical series of glucose chains. Meanwhile, maltose can be prepared by the hydrolysis of starch in the presence of the enzyme diastase. During hydrolysis, starch is broken down into two glucose molecules. Starch is also heated with a strong acid for several minutes in the process. In living organisms, the enzyme maltase helps the reaction to take place.

Maltose, sucrose and lactose they all are disaccharides made up of glucose units. Disaccharides are sugar and so are monosaccharides. These three sugars mentioned above have different components.

Difference Between Maltose And Cellobiose 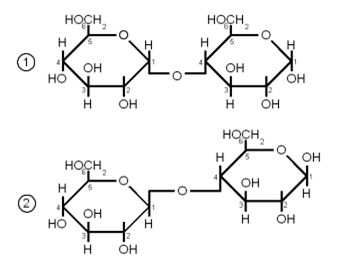 Both the maltose and cellobiose are the disaccharides but the main differences are given below.

What is maltose made up of?

Maltose is made up of two glucose molecules linked together by alpha (1,4) glycosidic linkage.

Is maltose a reducing sugar?

Yes, maltose is a reducing sugar.

What is the chemical formula of maltose?

The chemical formula of maltose is C12H22O11

Is maltose a monosaccharide or disaccharide?

Maltose is a disaccharide.

Does maltose give Fehling’s test?