Before getting into the structure of glucose let us first understand a few things about the compound. Glucose is a carbohydrate and an important biomolecule that helps in the metabolism of the body. It is a simple sugar having a molecular formula C6H12O6. In simple terms, we can say that it is made up of six carbon atoms, twelve hydrogen atoms and six oxygen atoms.

Glucose is a widely available monosaccharide and is also known as dextrose and blood sugar. Glucose is mainly manufactured by plants and most of the algae during the process of photosynthesis.

The glucose molecule is an important carbohydrate as mentioned above and it is also essential for the production of Adenosine Triphosphate (ATP) which is also known as the molecule of energy for the body. The level and amount of glucose are strictly regulated because both excessive and deficient amount of glucose levels results in the state of disease for a human body.

The structure of glucose is explained in detail with the help of the following conditions.

The open-chain formula of glucose can be constructed with the following facts:

This above reaction shows that the glucose molecule contains a straight chain with CHO at one end, which has been oxidized to COOH.

The configuration of D/L-Glucose was proved by the scientist Emil Fischer by arguments similar to the ones stated below;

Construction of four possible D-pentoses: Taking the configuration of D-glyceraldehyde as the standard two possible D-aldotetroses may be constructed by adding a CHOH just below CHO, by placing Oh to the right and after it to the left. 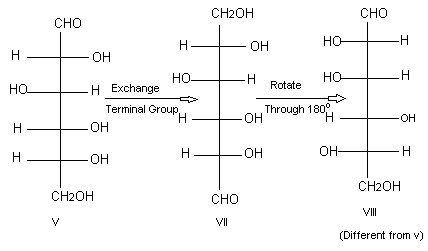 If VII is rotated through 180⁰C in the plane of the paper, it gives an aldohexoses VIII, different from V. A similar procedure with formula VI does not give rise to a different sugar.

Open-chain structure not wholly true: Fischer realized that the open-chain pentahydroxy aldehyde structure of glucose did not wholly explain its chemical behaviour. Unlike simple aldehydes, glucose did not form the crystalline bisulphate compound and failed to give the Schiff’s test. Furthermore, the pentaacetate and pentamethyl ether derivatives of glucose are not oxidized by Tollens reagent or Fehling’s solution, indicating the absence, indicating the absence of the CHO group.

To explain this phenomenon of mutarotation, it was visualized that the alpha and beta glucose were, in reality, the cyclic hemiacetal forms of glucose which were interconvertible via the open-chain form. The constant value of +19⁰ represented the state of equilibrium between alpha-D-glucose and beta-D-glucose. 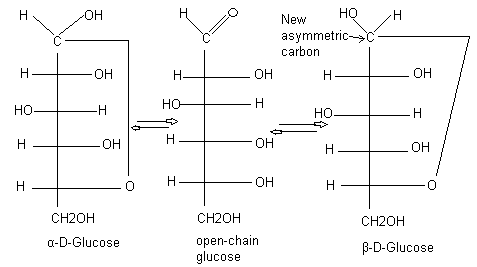 Glycoside formation confirms cyclic structure: When we use methanol in the presence of dry HCl to treat glucose, it gives two isomeric glycosides or acetals. These crystalline glycosides namely methyl-alpha-D-glucose and methyl-beta-Glucoside and are actually isolated. These are optically active but do not give any reactions of free CHO group. Evidently, the two glycosides are the methyl derivatives of alpha and beta-D-glucose, formed as a result of the reaction between the hemiacetal OH of these forms and methanol. Thus, the cyclic structure of D-glucose stands confirmed but whether it has a 5–membered or 6-membered ring is still to be proved.

Determination of ring size: So far we have represented the structure of cyclic hemiacetals or anomers of D-glucose as having a ring of six members, five carbons and one oxygen. This has been proved to be correct and the five-membered ring has been ruled out. 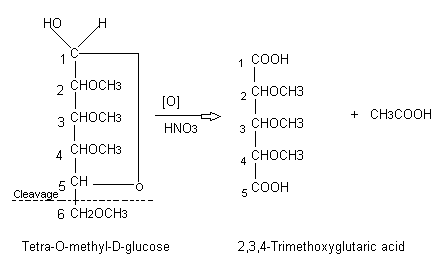 Obviously, the two carboxylic carbons (1,5) of the trimethoxy glutaric acid are the ones originally involved in ring formation. Hence, there must have existed an oxide ring between C-1 and C-2. Tracing back the reaction sequence, it stands proved that D-glucose has a six-membered ring. The presence of a 6-membered ring in D-glucose has also been confirmed by X-ray analysis.

The Haworth Representation of Glucose Structure

We have already talked about Fischer projection formulas for representing the cyclic forms of D-glucose. However, Haworth thought that these structures were awkward. He developed the hexagonal representations which resembled the heterocyclic pyran containing five carbon and one oxygen in the ring. He came up with the names alpha-D-glucopyranose and beta-D-glucopyranose for the hexagonal structures of alpha-D-glucose and beta-D-glucose. 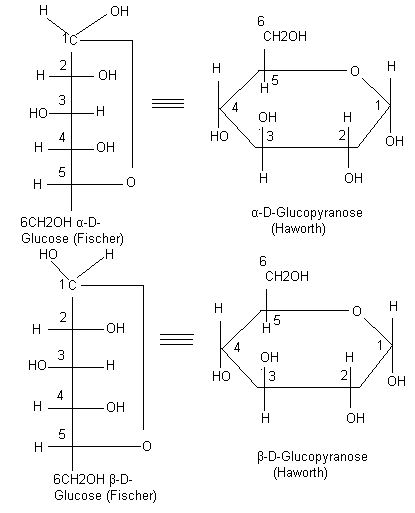 Glucose is a white crystalline solid with a melting point of 146⁰C. When this glucose molecule is crystallized with cold water, it forms glucose monohydrate having molecular formula C6H12O6.H20, and a melting point of 86⁰C. It is extremely soluble in water, only sparingly so in ethanol, and insoluble in ether. It is about three-fourths as sweet as cane sugar that is sucrose. It is optically active, and the ordinary naturally occurring form is (+)- glucose.