Class 12 Chemistry is very important for students, as it helps them to learn more about the elements and the compounds that make up the atoms and molecules. Plus two students who are interested to take up further studies in the realm of chemistry or those who wish to take up medical or engineering profession will also be widely interested in this subject. These students will also be looking for ways to get to the top of the class in plus two.

We, at BYJU’s realizing that students would be very much interested in all types of help they can get, is offering here the Kerala Plus Two Chemistry Important Questions. This along with the previous year and sample question papers would help the Kerala Board Class 12 Chemistry students to get an idea about the exam pattern, the type of questions asked etc. It also covers all the important concepts and topics that come under the Kerala Board Plus Two Chemistry Syllabus.

Here is an overview of the important questions we have compiled for you:

1.  A solution contains 15g urea (molar mass=60g mol) per litre of solution in water has the same osmotic pressure as a solution of glucose( molar mass= 180gm mol) in water. Calculate the mass of glucose present in one litre of its solution.

2. Explain how the complexes of nickel [Ni(CN)] and [Ni(CO)have different structures, but do not differ in their magnetic behaviour. (Ni, Atomic no.28).

(b) Write an example for a drug based on its chemical structure.

6. Write the anode and cathode reactions that occur in the operation of a lead storage battery. Mention the electrolyte used in the battery

7. (a) What is the formula for phosphine?

(b ) How is phosphine prepared in laboratory

8. (a) What are primary batteries?

(b) The cell potential of a mercury cell is 1.35V and remain constant during its life.Give reasons.

(c)Write the equations of the reactions involved at each electrode in an H – O fuel cell.

10. (a) State Hardy – Schulze Rule with the help of example.

(b) Why lyophilic colloids are used as protective colloids

11. Leaching is a process of concentration of the ore. Explain the leaching of alumina from bauxite

13. ‘Antibiotics, Antiseptics and disinfectants are antimicrobial drugs’. Explain any of the above mentioned drugs with examples.

14. What type of substance could make permanent magnets- ferromagnetic and ferrimagnetic? Justify your answer.

(i) Classify the following amines as primary, secondary and tertiary

(ii) Identify the products B and C and write their formulae

16. (a) Which of the following is a secondary cell

(b) What is the relationship between resistance and conductance?

17. (i) Catalysis can be classified into two groups- homogeneous and heterogeneous

(ii) Which of the following is an emulsifying agent?

18. (a) Aryl halides are less reactive in nucleophilic substitution reactions

(i) Write any two reasons for less reactivity

(ii) Give one example for nucleophilic substitution reactions of aryl halides

(b) Write a method for the preparation of alkyl halides

(c) Which of the following is not a polyhalogen compound? 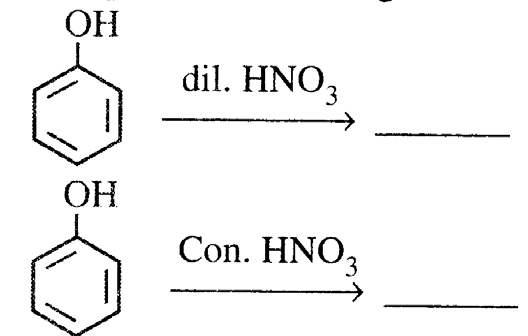 You can also download the PDF version of the important questions here.

Also, tune into BYJU’S and get more information about the Kerala board of higher secondary education class 12 exams.