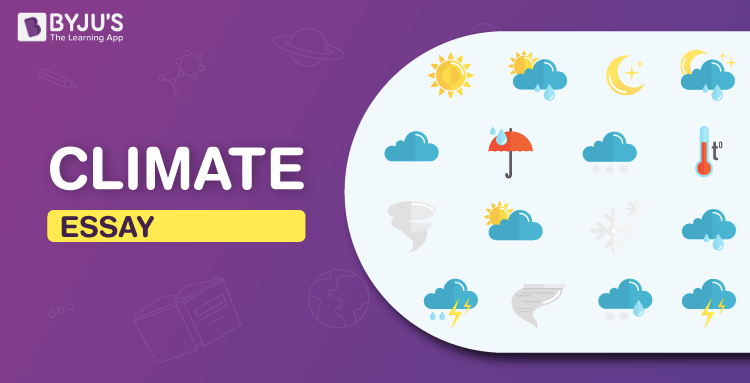 An essay on climate discusses how the changing climate has detrimental effects on our ability to survive and what we can do to combat the issue. Human impact on the environment has changed the world’s climate. There are many factors to consider when explaining the cause of a problem. The short essay on climate discusses how much control humans have over the environment.

Factors influencing climate change include natural gas usage, use of plastics and paper, greenhouse gases such as chlorofluorocarbons, ozone depletion and others.

Global warming is a significant problem that affects the whole world. It is a constant struggle for governments to implement environmental protection laws and adopt sustainable energy by cutting carbon emissions.

The recent global warming trend of the earth is one of the most crucial environmental and social issues today. It has been mainly caused by greenhouse gas emissions released through human activities.

Causes of Climate Change in India

Climate change refers to any change in weather patterns that alters natural moisture flow and causes uncertainty in allocating water resources. The impacts of both are hard to pinpoint, but they have been linked to many adverse effects around the world. This essay on climate of India explains to children the causes of climate change in the country.

Global warming is a major threat to all species and causes many other problems in India. It is believed that climate change will affect more than just animals and humans. Causes of climate change include the following: increase in greenhouse gases due to population explosion, inefficient use of natural resources and energy, increase in global temperatures and a rise in sea levels.

Climate change has been a topic of discussion for years. There are a few different aspects of the climate that we can discuss. One is global warming, and the other is climate change. With global warming, the temperature on earth has been steadily increasing over the last century at an alarming rate.

How to Overcome Climate Change?

One of the key ways to combat climate change is to switch from a carbon-based energy system to a renewable one. These systems rely less on fossil fuels and more on biodegradable sources, such as solar and wind power.

Individual efforts to reduce carbon emissions are not enough, and the world needs collective action to reverse the environmental damage we are causing. These options include enacting a carbon tax, changing the transportation industry, and limiting urban sprawl.

The most important thing to be aware of is that climate change will not happen all at once. It is happening right now, and people worldwide should adopt a low-carbon lifestyle to prepare for it.

Another way to overcome it is by reducing the amount of CO2 through carbon footprint. However, that can only be done by the countries with a higher income. The other way would be to reduce the consumption of meat and switch to more plant-based food.

The recent global warming has raised the question of how to overcome climate change. Some people believe that human ingenuity and innovation can overcome this challenge, while others feel that humans need to reduce their carbon emissions drastically. While some scientists predict that we are nearing the end of our planet, there is still hope for humans and the planet.

By helping kids read BYJU’S short essay on climate, you can help them learn the causes and measures to tackle climate change.

What are the reasons for climate change?

There are many reasons that climate change has occurred, but the most important is the increasing level of carbon dioxide. The greenhouse effect causes climate changes when the atmosphere traps heat in because of too much CO2. Due to deforestation, carbon dioxide is not absorbed by plants and trees, which leads to increased atmospheric temperature and to climate change.

How to overcome the climate crisis?

One way to help with the climate crisis is to consume less energy. A decrease in energy consumption reduces pollution and carbon dioxide in the atmosphere. Another way to help climate change is by switching to renewable energy and proper maintenance of electric devices.