Hansel and Gretel Story is a popular fairy tale for kids. Here we bring you Hansel and Gretel short story, which is about a brother-sister duo who were lost in a dense forest. They soon fall prey into the hands of a wicked witch who lived in a house made of candy, gingerbread and pastries. The cannibalistic witch used to fatten the children before eventually eating them. But Gretel saved her brother, Hansel by outwitting the witch and eventually killed her. You can download the Hansel and Gretel story PDF for free, from the link provided below. 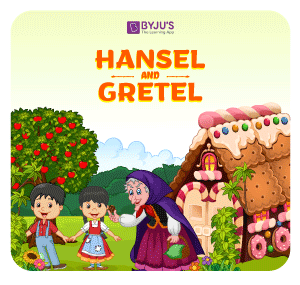 Once upon a time, there lived in the woods a brother and sister named Hansel and Gretel with their father and stepmother. Their father was a poor woodcutter who loved them very much. On the contrary, their stepmother always made life hard for the brother-sister duo, Hansel and Gretel. She did not allow them to eat food properly until she had eaten most of the food off the plates. The children mostly got only a crust of the bread left to feed themselves.

Hansel and Gretel often tried to tell their father that they were hungry, but he hardly paid heed to their words. He would only listen to his wife in order to please her. The stepmother disliked the children and often wished that they would leave the house forever. With every passing day, the children would get lesser food and their stepmother would make them work harder.

One day, the stepmother over-burdened the children with enormous tasks. When it was time to have dinner, she gave them very little food to eat. Seeing this, Gretel cried and told her stepmother that all day she and her brother, Hansel had worked hard. So, she requested her stepmother to give them enough food to eat as they were very hungry. Hearing this, her stepmother yelled at her and said that they were ungrateful brats who were exhausting all the resources in the house.

That night, Gretel and Hansel had to sleep outside the cottage as a punishment for arguing with their stepmother. It was a bitter cold winter night. Both the children shivered in the freezing cold and tried to keep each other warm. Both of them wore light clothes and tried their best to comfort each other in the cold weather.

The following morning when the sun rose, Gretel told her brother, Hansel that she was fed up with the ill-treatment of their stepmother. The children decided to escape into the woods where they could find some food and return home before it grew dark. Although Hansel was initially a little hesitant as he thought that they might get lost while roaming in the woods.

To this, Gretel told him that she would drop a few breadcrumbs behind them so that they could return home by following the trail. Convinced with his sister’s point, Hansel and Gretel set off towards the woods with the hope of finding some food for themselves. As they went deeper into the woods, Gretel dropped one crumb after another.

As they walked deeper into the woods, they could not find any food anywhere. The children were starving out of hunger. It was also getting darker, so Hansel and Gretel decided to return home, otherwise they would die of starvation. When they looked back for the trail of breadcrumbs to return home, they were left shocked. All the crumbs had disappeared!

At that moment, they suddenly noticed a bird flying across holding a crumb in its tiny beak. Seeing this, they understood that the birds might have eaten up all the breadcrumbs on the way. Suddenly out of nowhere, Gretel and Hansel heard a wolf howl at a distance. They got scared and hugged each other tightly. They noticed that it was getting darker as the sun began to set. The children felt lost in the midst of the woods. They knew they had lost their path and were starving too.

All of a sudden, Gretel noticed a small light flickering from a house in the middle of the dense forest. She and Hansel wondered if there was someone staying in that house. Hansel and Gretel made their way towards the house with the hope that whoever lived in the house would let them stay in it for a while. They ran as fast as they could towards the light and arrived at the house where the light was coming from.

As they drew closer to the house, they observed that it was a strange-looking house. The house was made of candy with a gingerbread roof and there was frosting on the walls and big candies all over the frosting. The children were overjoyed and they decided to taste the house. Both Hansel and Gretel took small pieces and started licking the candy from the house.

As Gretel and Hansel were enjoying the taste, they heard a sharp voice coming from inside the house. It said, “Who is gnawing on my house?” Hansel and Gretel stopped nibbling and quickly turned around. They noticed an old witch standing on the doorway. Gretel was left speechless. But soon she curtsied the witch and said, “We were passing by the woods and noticed that there is candy on your house. We are hungry and so, we tasted a bit of the candy”.

Hearing this, the witch replied, “Well, you can come inside and I can offer you some food to eat”. Hansel and Gretel were surprised and happy at the offer of the witch. They entered her house and ate food given by the witch to their hearts’ content. After they were done, they looked around the house and noticed that there were piles of bones stacked in the corners. They were astonished but were so tired that they dozed off immediately.

When they woke up the next morning, Hansel found himself inside a cage. The witch was a wicked person who locked him up inside. She snapped and said to Gretel, “Your brother will stay locked inside that cage for now and I will fatten him up every day. Soon he will make me a delicious dinner!” She cackled as she rubbed her hands in exhilaration. She further said to Gretel, “Till then, you will do all the household chores for me.”

From that day onwards, Hansel was fed until his stomach was full. On the other hand, Gretel would work hard all day and do all the chores for the witch. Every morning, the wicked witch would check Hansel’s fingers to see if he was growing plump enough to make her a fine dinner. Poor Hansel held out his finger as instructed by the witch. The witch would maliciously scowl and eagerly waited for Hansel to grow plump and fat like a turkey.

Hansel would call out his sister, Gretel without the witch noticing it. He urged Gretel to think of a plan to escape the witch so that he didn’t end up being served as dinner to the wicked witch. Exhausted by doing all the chores in the house, Gretel was deeply worried how to save her brother from the evil gaze of the witch. She came up with a plan when the witch was fast asleep one night.

The next morning while cleaning the house, Gretel picked up a bone from the piles kept on the floor and gave it to Hansel. She woke up her brother and told him to hold out the bone, whenever the witch asked him to show his finger. Hansel did as instructed. That day, when the witch came to check on Hansel’s finger, he held out the bone to her.

When the witch touched Hansel’s finger, she frowned upon touching the bone as she thought it was the little boy’s finger. She said, “Hmph!” “It is going to take longer than I assumed to fatten you up!” Hearing this, both Hansel and Gretel heaved a sigh of relief as they felt they had got some more time to escape from the clutches of the evil witch.

Each morning, the witch would check on Hansel’s finger and he held out the thin bone. One day, the witch was furious and yelled to Hansel, “I am tired of waiting for you to become plump! You will be my dinner tonight, irrespective of how skinny you are!” Soon, the witch ordered Gretel to ignite the fire in the oven at once. She told Gretel that the oven must get red-hot. Gretel deliberately worked as slowly as she could. She noticed that the witch was watching her with a sly smile on her face.

The witch ordered Gretel with a slow grin, “Go inside the oven and tell me if it is hot enough to put your brother inside.” Gretel got scared and was left dumbfounded on hearing this. She wondered if the witch would push her inside the oven. She looked on the floor and said to the witch, “I am not sure how to tell if the oven is hot. Would you please show me first?”

The wicked witch was furious and grumbled, “Stupid girl! This is how you check it” Saying so, she stepped inside. The moment the witch went inside the oven, Gretel quickly slammed the door behind her. The witch was thus trapped inside the hot oven.

Seeing this, Hansel cried out, “Look Gretel! You just saved us!” Without wasting any time, Gretel quickly began searching for the key of the cage where Hansel was locked. She looked around and found the key in a vase. She freed Hansel right away. While taking the key, she could feel something else was also there inside the vase. It indeed was. The vase was filled with precious gems and jewels!

Both Gretel and Hansel filled their pockets with jewels and ran away from the witch’s house as fast as they could. Soon, they found a small path that led them to a bigger path which at last led them to a main road. They waited eagerly on the road hoping someone would offer them a ride. Soon, a horseman was passing by and Hansel and Gretel waved their hands and asked him for a ride. They gave him a small jewel and the horseman was content and offered them a ride to their home.

Soon, the brother-sister duo Hansel and Gretel reached their house. Their father was overjoyed and filled with happiness when he saw his children after a gap of so many days. He had been worried and had looked out for them day and night since they left the house. Later, the children learnt that their stepmother had passed away soon after they had left the house. Finally, Hansel and Gretel lived happily ever after with their father in their house in the midst of the woods.

Liked the Hansel and Gretel witch hunters story? You can access plenty of such enchanting fairy tales from the BYJU’S website. We also have a comprehensive collection of stories for children such as Moral stories, Panchatantra tales, Bedtime Stories, etc. for your ready reference.

Besides, to access more such awesome learning resources for your kids, you may also want to check our Kids’ Learning section on the BYJU’S website and make your child fall in love with learning.