Click here to get more information on the binary number system.

However, it is possible to convert numbers from decimal to binary and binary to decimal. In this article, you will learn how to convert the decimal number 100 to a binary system.

The binary equivalent of 100 is 1100100. As we know, to convert any number from the decimal system to binary, we have to divide the number by 2 and keep track of the remainder. To convert decimal to binary numbers, proceed with the steps given below:

Step 1: Divide the given decimal number by “2”, where it provides the result along with the remainder.

Step 2: If the given decimal number is even, then the result will be a whole number, and it provides the remainder with “0.”

Step 3: If the given decimal number is odd, then the result is not appropriately divided, and it provides the remainder with “1”.

The below figure shows the conversion of the number 100 to binary number. 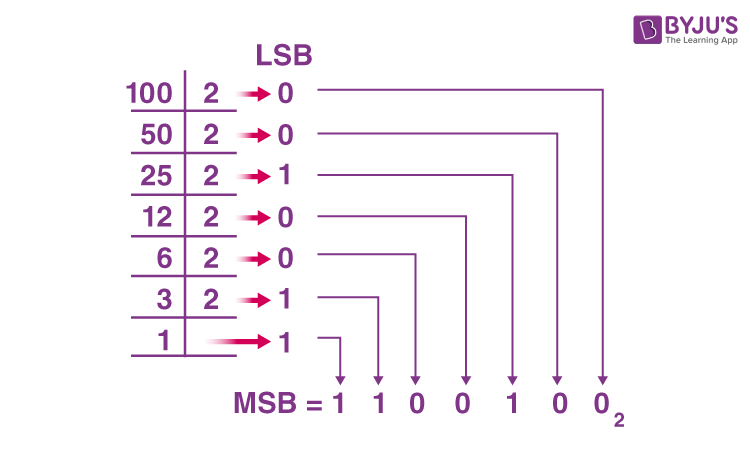 The representation of 100 in a binary number can be done as shown below. 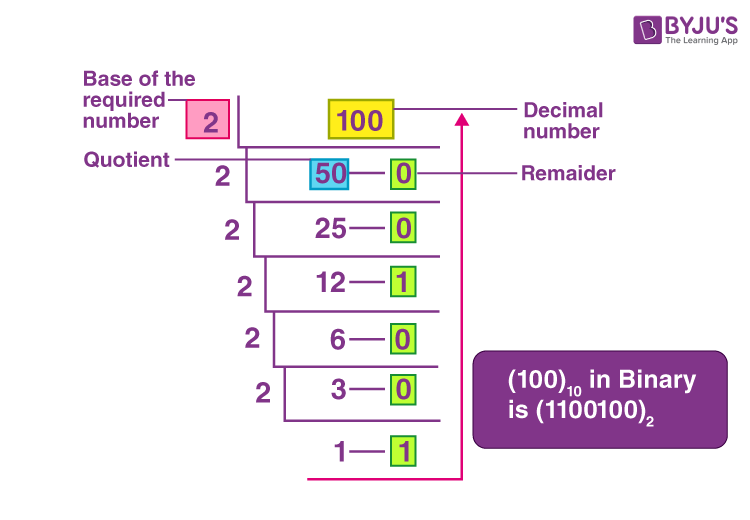 The above figure depicts the division method of converting 100 to binary number.

Go through the table given below to know the conversion of numbers from 1 to 100 in the binary system.

What is 1 in Binary?

The decimal number 1 in the binary system is also 1. That means, the binary equivalent of 1 is 1 only.

100 in Binary to Decimal

We have converted the decimal number 100 into binary. In this section, you can learn how to convert binary to decimal, i.e. (1100100)2 to decimal. For this, we can use the formula given below:

b is the digit,

In other words, we need to multiply each digit of the binary number by the corresponding power of 2 and then sum up to get the required decimal value.

To get more information about conversion of numbers from one number system to another, visit www.byjus.com today and get solved examples of the same for better understanding.

How do you represent 200 in binary?