Number System is a way to represent numbers in computer architecture. There are four different types of the number system, such as:

In this article, let us discuss what is a binary number system, conversion from one system to other systems,  table, positions, binary operations such as addition, subtraction, multiplication, and division, uses and solved examples in detail.

What is a Binary Number System?

Binary Number System: According to digital electronics and mathematics, a binary number is defined as a number that is expressed in the binary system or base 2 numeral system. It describes numeric values by two separate symbols; 1 (one) and 0 (zero). The base-2 system is the positional notation with 2 as a radix.

The binary system is applied internally by almost all latest computers and computer-based devices because of its direct implementation in electronic circuits using logic gates. Every digit is referred to as a bit.

Here, 4 is represented in the decimal number system, where we can represent the number using the digits from 0-9. However, in a binary number system, we use only two digits, such as 0 and 1.

Step 1: First, divide the number 4 by 2. Use the integer quotient obtained in this step as the dividend for the next step. Continue this step, until the quotient becomes 0.

So, if we want to find how many bits does 4 in binary have? we have to count the number of zeros and ones.

Therefore, the number of bits does 4 in binary have is 3.

What is Bit in Binary Number?

A single binary digit is called a “Bit”. A binary number consists of several bits. Examples are:

Some of the binary notations of lists of decimal numbers from 1 to 30,  are mentioned in the below list.

How to Calculate Binary Numbers

For example, the number to be operated is 1235.

The above table can be described as,

In the Binary system, we have ones, twos, fours etc…

To show the values greater than or less than one, the numbers can be placed to the left or right of the point.

For 10.1, 10 is a whole number on the left side of the decimal, and as we move more left, the number place gets bigger (Twice).

The first digit on the right is always Halves ½ and as we move more right, the number gets smaller (half as big).

In the example given above:

Like we perform the arithmetic operations in numerals, in the same way, we can perform addition, subtraction, multiplication and division operations on Binary numbers. Let us learn them one by one.

Let us take an example of two binary numbers and add them.

Let us take an example of two binary numbers and subtract them.

The multiplication process is the same for the binary numbers as it is for numerals. Let us understand it with example. 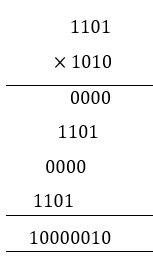 The binary division is similar to the decimal number division method. We will learn with an example here.

Binary numbers are commonly used in computer applications. All the coding and languages in computers such as C, C++, Java, etc. use binary digits 0 and 1 to write a program or encode any digital data. The computer understands only the coded language. Therefore these 2-digit number system is used to represent a set of data or information in discrete bits of information.

Let us practice some of the problems for better understanding:

Question 1: What is binary number 1.1 in decimal?

Step 2: The one on the right-hand side is in halves, so it’s

Keep visiting BYJU’S to explore and learn more such Math-related topics in a fun and engaging way.

What is a binary number system?

What is a bit?

A bit is a single digit in the binary number. For example, 101 is three-bit binary numbers, where 1, 0 and 1 are the bits.

How to convert a decimal number into a binary number? Give an example.

What is the use of binary numbers?

Binary numbers are commonly used in computer architecture. Since the computer understands only the language of two digits 0’s and 1’s, therefore the programming is done using a binary number system.

How is 200 represented in binary?