There are several maths theorems which govern the rules of modern mathematics. Almost in every branch of mathematics, there are numerous theorems established by renowned mathematicians from around the world. Here, the list of most important theorems in maths for all the classes (from 6 to 12) are provided, which are essential to build a stronger foundation in basic mathematics.

What are Theorems in Maths?

Mathematical theorems can be defined as statements which are accepted as true through previously accepted statements, mathematical operations or arguments. For any maths theorem, there is an established proof which justifies the truthfulness of the theorem statement.

Why are Theorems Important in Maths?

Theorems are of significance and are considered as absolute truths. Theorems not only help to solve mathematical problems easily but their proofs also help to develop a deeper understanding of the underlying concepts. For students, theorems not only form the foundation of basic mathematics but also helps them to develop deductive reasoning when they completely understand the statements and their proofs.

In Class 10 Maths, several important theorems are introduced which forms the base of mathematical concepts. Class 10 students are required to learn thoroughly all the theorems with statements and proofs, not only to score well in the board exam but also to create a stronger foundation in the subject. Some important maths theorems for Class 10 are listed below.

For Class 10, some of the most important theorems are:

Apart from these theorems, the lessons that have the most important theorems are circles and triangles. Some important triangles and circles theorems for 10th standard are given below.

There are various theorems related to the circle. The circle theorems are important for both Class 9 and 10 students. A few important theorems are:

Construction: ABC is a triangle, DE is a line parallel to BC and intersecting AB at D and AC at E, i.e. DE || BC. 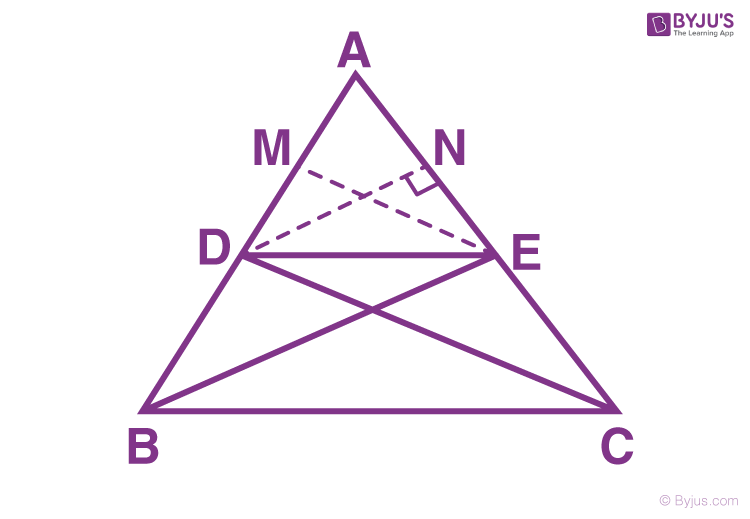 Triangles DEC and BDE are on the same base, i.e. DE and between same parallels DE and BC.

From the above equations, we can say that

If a line divides any of the two sides of a triangle in the same ratio, then that line is parallel to the third side.

ABC is a triangle in which DE divides AC and AB in the same ratio. This states that: 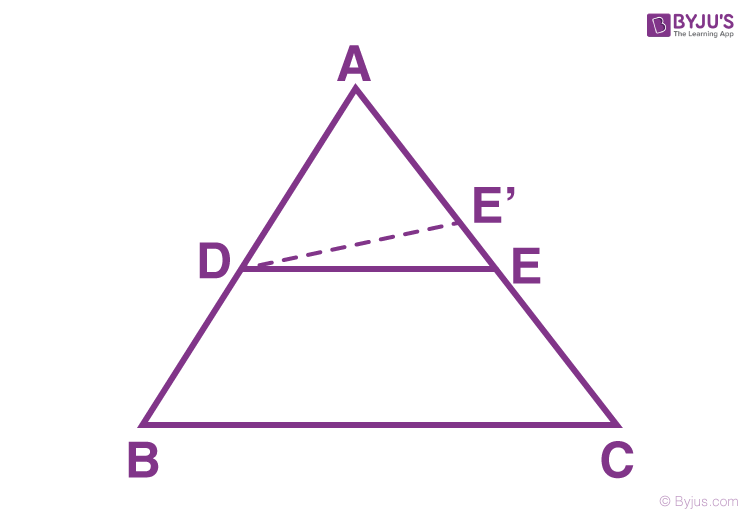 Construction: Draw a line DE’ from point D to E’ at AC. Let us consider DE’//BC.

Then, accordingly, E and E` must be coincident.

This proves that DE || BC

Two triangles ABC and DEF are drawn in such a way that their corresponding sides are proportional. It means:

Since the corresponding sides of the two triangles are equal.

This also means that ∠P = ∠E and ∠Q = ∠F

Pythagoras Theorem: In a right-angled triangle, the square of the hypotenuse is equal to the sum of the squares of the other two sides.

ABC is a triangle which is right-angled at B. BD is perpendicular to hypotenuse AC drawn from vertex B.

In triangle ABC and ADB,

In triangles ABC and BDC;