x is any real number.

If the variable is negative, the function is undefined for -1 < x < 1.

“x” is a variable

“a” is a constant, which is the base of the function.

But, mostly the base of the exponential function is encountered by the transcendental number “e”, which is approximately equal to 2.71828.

The following figure represents the graph of exponents of x. It can be seen that as the exponent increases, the curves get steeper and the rate of growth increases respectively. Thus for x > 1, the value of y = fn(x) increases for increasing values of (n). The value of this series lies between 2 &3. it is represented by e. Keeping e as base the function, we get y = ex, which is a very important function in mathematics known as a natural exponential function. For base a = 10, this function is known as common logarithm and for base a = e, it is known as natural logarithm denoted by ln x. Following are some of the important observations regarding logarithmic functions which has base a>1. 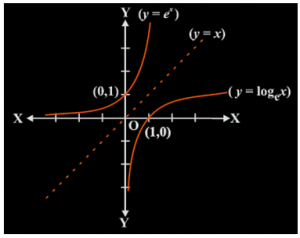 Let us now focus on the derivative of exponential functions.

The following are the properties of the exponential functions: 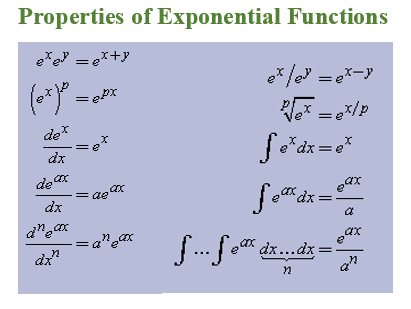 Since the bases are the same (i.e. 5), equate the values of powers.

From the given equation, it is noted that the bases are the same (i.e. 6), equate the values of powers.

Now, simplify this equation, we get