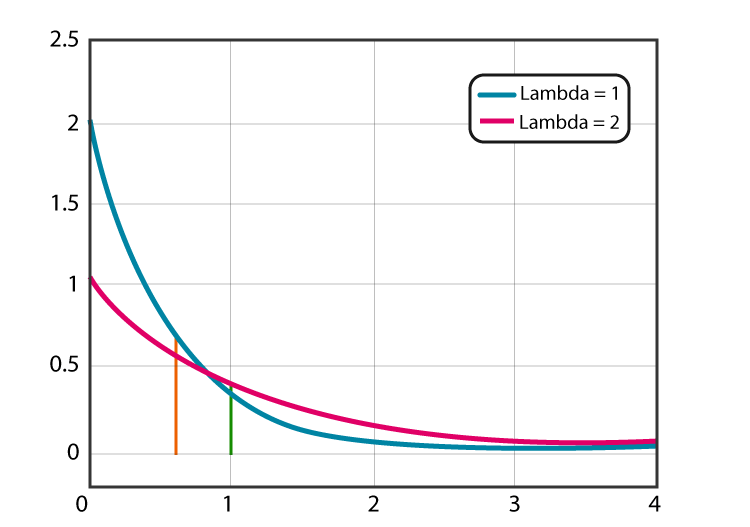 There are a number of formulas defined for this distribution based on its characteristics. Let us learn them one by one.

The probability density function (pdf) of an exponential distribution is given by;

The exponential distribution shows infinite divisibility which is the probability distribution of the sum of an arbitrary number of independent and identically distributed random variables.

The expected value of an exponential random variable X with rate parameter λ is given by;

The variance of exponential random variable X is given by;

Therefore, the standard deviation is equal to the mean.

The ‘moment generating function’ of an exponential random variable X for any time interval t<λ, is defined by;

This distribution has a memorylessness, which indicates it “forgets” what has occurred before it. We can say if we continue to wait, the length of time we wait for, neither increases nor decreases the likelihood of an event occurring. Any time may be considered as time zero. It is defined as;

X is the time we need to wait before a specific event happens. The above expression defines the possibility that the event occurred during a time interval of length ‘t’ is independent of how much time has already passed (x) without the event happening.

Where Z is the gamma random variable which has parameters 2n and n/λ and Xi = X1, X2, …, Xn are n mutually independent variables.

Assume that, you usually get 2 phone calls per hour. calculate the probability, that a phone call will come within the next hour.

It is given that, 2 phone calls per hour. So, it would expect that one phone call at every half-an-hour. So, we can take

So, the computation is as follows:

Therefore, the probability of arriving the phone calls within the next hour is  0.393469

Stay tuned with BYJU’S – The Learning App and download the app to learn with ease by exploring more Maths-related videos.