Law of sines defines the ratio of sides of a triangle and their respective sine angles are equivalent to each other. The other names of the law of sines are sine law, sine rule and sine formula.

In general, the law of sines is defined as the ratio of side length to the sine of the opposite angle. It holds for all the three sides of a triangle respective of their sides and angles.

The law of sine is explained in detail as follow: 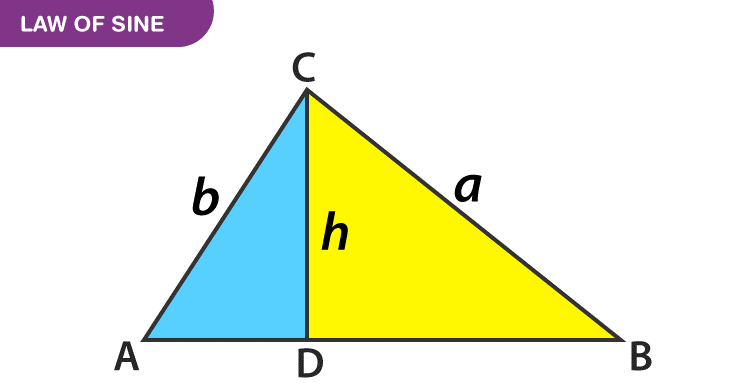 So, we use the Sine rule to find unknown lengths or angles of the triangle. It is also called as Sine Rule, Sine Law or Sine Formula. While finding the unknown angle of a triangle, the law of sines formula can be written as follows:

In this case, the fraction is interchanged. It means that Sin A/a, instead of taking a/sin A.

We need a right-angled triangle to prove the above as the trigonometric functions, which are mostly defined in terms of this type of triangle only.

Construction: Draw a perpendicular, CD ⊥ AB. Then CD = h is the height of the triangle. “h” separates the △ ABC in two right-angled triangles, △CDA and △CDB.

And we proved it.

Similarly, we can prove, Sin B/ Sin C= b / c and so on for any pair of angles and their opposite sides.

The formulas used with respect to the law of sine are given below.

Here, Sin A is a number and a is the length.

The trigonometry ratios such as sine, cosine and tangent are primary functions that are used to find the unknown angles or sides of a right triangle. The applications of sine law are given below:

The sine law is used to find the unknown angle or unknown side.

As per the law, we know, if a, b and c are the lengths of three sides of a triangle and ∠A, ∠B and ∠C are the angles between the sides, then;

By the sine law, we know;

Now putting the values, we get;

The law of sines is generally used to find the unknown angle or side of a triangle. This law can be used if certain combinations of measurement of a triangle are given.

These two criteria will provide a unique solution, as AAS and ASA methods are used to prove the congruence of triangles.

In an ambiguous case, if in a triangle two sides and the angle opposite to them are known, then there could be three possibilities:

Law of sines in Real life

Law of sines and Cosines

Both the law of sines and cosines are used to find the unknown angle or an unknown side of a triangle. Let us counter the difference between the two laws. 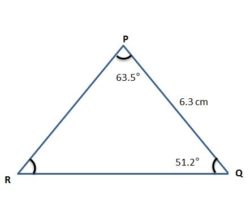 What is meant by the law of sines?

The law of sine or the sine law states that the ratio of the side length of a triangle to the sine of the opposite angle, which is the same for all three sides. It is also known as the sine rule.

Write down the sine rule.

Why do we use the law of sines?

The law of sines is used to determine the unknown side of a triangle when two angles and sides are given.

In which cases, can we use the law of sines?

Mention the other way to represent the sine rule formula.

Get started with Practicing more of trigonometric problems with BYJU’S – The Learning App.

Test your knowledge on Law Of Sines
Q5