The Mean Value Theorem is considered to be among the crucial tools in Calculus.  This theorem is very useful in analyzing the behaviour of the functions. As per this theorem, if f is a continuous function on the closed interval [a,b] (Continuous Integration) and it can be differentiated in open interval (a,b), then there exist a point c in interval (a,b), such as;

Let us go through the proof of this theorem along with the applications for integrals and derivatives.

What is Mean Value Theorem?

According to the theorem, if f(x) is defined and is continuous on the interval [a,b] and can be differentiated on (a,b), then we have at least one value c in the interval (a,b) wherein a<c<b , such that

Rolle’s Theorem is a special case where f(a) = f(b). Here, we have f’(c) = 0. If put differently, there is a point at the interval (a,b) that consists of a horizontal tangent. The Mean Value Theorem can also be stated based on slopes. 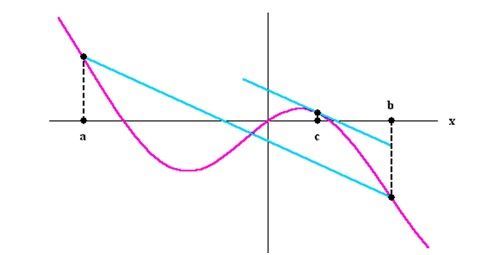 The mean value theorem for integrals is the direct consequence of the first fundamental theorem of calculus and the mean value theorem. This theorem states that if “f” is continuous on the closed bounded interval, say  [a, b], then there exists at least one number in  c in (a, b), such that

Suppose f is a continuous, real-valued function, described on an arbitrary interval (I) of the real line. If the derivative of function f at each interior point of I exists and is equal to zero, then f is constant in the interior.

Proof: Let (a, b) be an arbitrary open interval in I. By the mean value theorem, there exists a point c in (a,b) such that;

This indicates that f(a) = f(b). Thus, f is continuous on the interior of I.

There are several applications of mean value theorem. This theorem is applied in:

For more Maths theorems, register with BYJU’S – The Learning App and download the app to explore interesting videos.