The visual way of representing a hierarchy in a tree-like structure is called a tree diagram. A typical tree structure consists of a root node, node and leaf node.

A tree diagram is often used:

In mathematics, the tree diagram is used in probability and statistics and it allows us to calculate the number of possible outcomes of an event where those outcomes are listed in an organised manner. Each path of the branches in the tree diagram represents one outcome of an event. It is a simple way of representing the sequences of events and it records all the possible outcomes in an uncomplicated and clear manner.

In general, tree diagram starts with the one item or node, that branches into two or more, then each of the nodes will branch into two or more, and so on. Then the final diagram resembles a tree with a trunk and multiple branches.

In probability theory, a tree diagram could be utilised to express a probability space. These diagrams may describe a sequence of independent events (for example a set of a coin tossed) or conditional probabilities (like drawing cards from a deck, without substituting the cards).

Every node on the tree diagram shows an event and is connected with the probability of that happening. The root node denotes the specific event and therefore it has a probability as 1. All set of sibling joints or nodes designates an independent and exhaustive distribution of the parent event.

Sometimes we feel difficulties while calculating probabilities and it is hard to figure out what to do. Tree diagram will rescue this difficulty. Consider an example in probability to draw a tree diagram for tossing a coin. There are two branches: head and tail. The probability of an event is written on the branch and the outcome are written at the end of the branch.

Therefore, the tree diagram to represent the probability of tossing a coin is given below.

We can also draw a tree diagram for tossing two coins:

How to calculate the overall probability in the Tree Diagram?

Probability of an event, P(E) = Number of favourable outcomes/ Total number of outcomes.

Also, there is the number of probability formulas in probability theory, each depends upon the type of event.

When you add all the probability values obtained, the result should be equal to 1.

Consider the experiment of tossing a coin. If the coin shows head, toss it again but if it shows a tail, then throw a die. Find the conditional probability of the event that ‘the die shows a number greater than 4’ given that ‘there is at least one tail’.

Solution:  The results of the experiment expressed in a diagrammatic manner called the ‘tree diagram’, where branches and nodes of the tree explain the event or a happening. 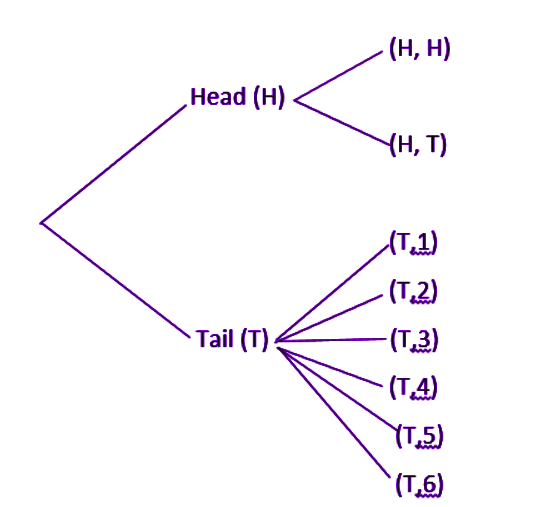 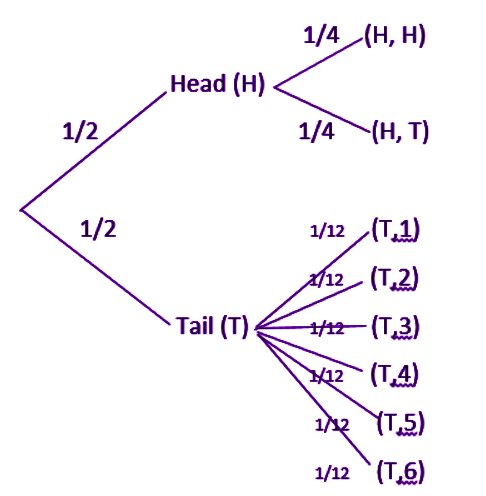 Let F be the event that ‘there is at least one tail’ and E be the event ‘the die shows a number greater than 4’. Then:

So, the probability of getting black balls = 3/8

The probability of getting white balls = 5/8

Therefore, the tree diagram for two draws of balls with possible outcomes and probability is given as below. 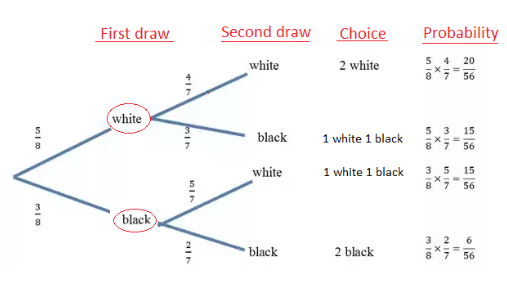 For more information on tree diagram and probabilities, register with BYJU’S – The Learning App and also watch other maths-related videos.