A number or quantity that when multiplied with another number produces a given number or expression. For example, the factors of 12 are 1, 2, 3, 4, 6 and 12.

Any number can be expressed in the form of its factors as shown above.

In terms of its prime factors, 12 can be expressed as:

Algebraic Expressions can be factorized using many methods. The most common methods used for factorization of algebraic expressions are:

Let us discuss these methods one by one in detail:

To understand this more clearly let us take an example.

Solution- The algebraic expression can be re-written as 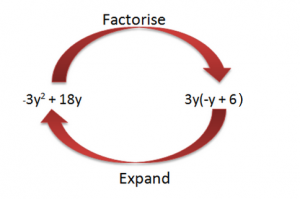 After regrouping it can be seen that (a-1) is a common factor in each term,

Thus, by regrouping terms we can factorize algebraic expressions.

An equality relation which holds true for all the values of variables in mathematics is known as an identity. Consider the following identities:

On substituting any value of a and b, both sides of the given equations remain the same. Therefore, these equations are called identities.

Solution: Observe the given expression carefully. This expression has three terms and all the terms are positive. Moreover, the first and the second term are perfect squares. The expression fits the form \((a+b)^{2} = a^{2}+b^{2}+2ab\) where a = 3x, b = 2m.

To know more about factorization and algebraic expressions visit our BYJU’S site.