What is a Pie Chart?

The “pie chart” is also known as a “circle chart”, dividing the circular statistical graphic into sectors or sections to illustrate the numerical problems. Each sector denotes a proportionate part of the whole. To find out the composition of something, Pie-chart works the best at that time. In most cases, pie charts replace other graphs like the bar graph, line plots, histograms, etc.

The pie chart is an important type of data representation. It contains different segments and sectors in which each segment and sector of a pie chart forms a specific portion of the total(percentage). The sum of all the data is equal to 360°.

To work out with the percentage for a pie chart, follow the steps given below:

Therefore, the pie chart formula is given as

Note: It is not mandatory to convert the given data into percentages until it is specified. We can directly calculate the degrees for given data values and draw the pie chart accordingly.

How to Create a Pie Chart?

Imagine a teacher surveys her class on the basis of favourite Sports of students:

The data above can be represented by a pie chart as following and by using the circle graph formula, i.e. the pie chart formula given below. It makes the size of the portion easy to understand.

Step 1: First, Enter the data into the table.

Step 2: Add all the values in the table to get the total.

I.e. Total students are 40 in this case.

Step 3: Next, divide each value by the total and multiply by 100 to get a per cent:

Step 4: Next to know how many degrees for each “pie sector” we need, we will take a full circle of 360° and follow the calculations below:

Now you can draw a pie chart.

Step 5: Draw a circle and use the protractor to measure the degree of each sector. 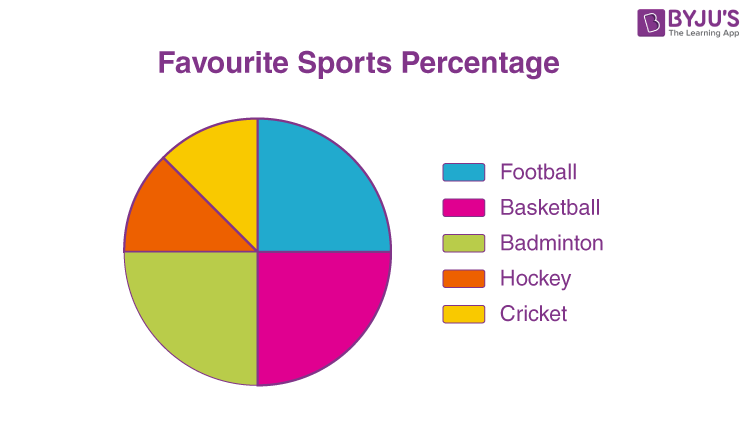 Let us take an example for a pie chart with an explanation here to understand the concept in a better way.

Question: The percentages of various cops cultivated in a village of particular distinct are given in the following table.

Represent this information using a pie-chart.

The central angle for each category is calculated as follows

Now, the pie-chart can be constructed by using the given data.

Step 1: Draw the circle of an appropriate radius.

Step 2: Draw a vertical radius anywhere inside the circle.

Step 3: Choose the largest central angle. Construct a sector of a central angle, whose one radius coincides with the radius drawn in step 2, and the other radius is in the clockwise direction to the vertical radius.

Step 4: Construct other sectors representing other values in the clockwise direction in descending order of magnitudes of their central angles.

Step 5: Shade the sectors obtained by different colours and label them as shown in the figure below. 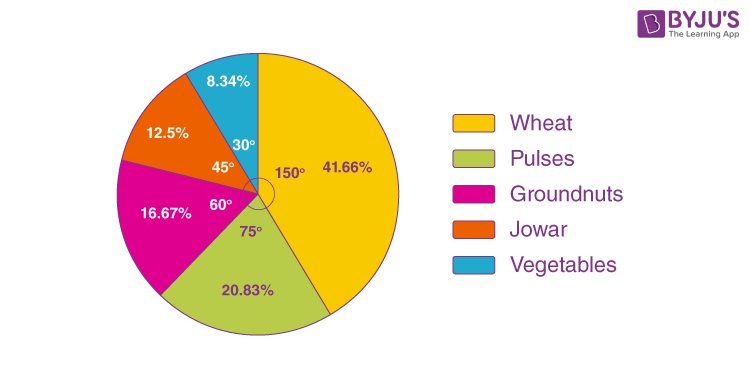 Till now you understood how to draw a pie chart for the given data using geometric tools. In this section, you will know how to make the pie chart using an online tool. People often use a graphing feature in excel sheets to get the desired pie chart. However, we have provided an online pie chart maker.

How to Solve Pie Chart Questions?

In this section, you will learn how to solve or interpret the pie chart to get the original values. For this, we need to check whether the given chart is given in percentages, degrees or without any value. Based on this information, we can solve the questions related to pie charts. Let’s have a look at the solved example to understand this thoroughly.

The pie-chart shows the marks obtained by a student in an examination. If the student secures 440 marks in all, calculate the marks in each of the given subjects.

The given pie chart shows the marks obtained in the form of degrees.

Now, we can calculate the marks obtained in each subject as follows.

This can be tabulated as:

A pie chart can be used to represent the relative size of a variety of data such as:

You can practice another pie chart question for Class 8, given below:

Question: Priya lists down her monthly expenditure as follows:

Draw a pie chart for her monthly expenses.

What is a pie chart?

A pie chart is a pictorial representation of data. The slices of pie here shows the relative sizes of data. The same data is represented in different sizes with the help of pie charts.

Why do we use pie charts?

Pie charts are used to represent the proportional data or relative data in a single chart. The concept of pie slices is used to show the percentage of a particular data from the whole pie.

How to calculate the percentage of data in the pie chart?

Measure the angle of each slice of the pie chart and divide by 360 degrees. Now multiply the value by 100. The percentage of particular data will be calculated.

How to find the total number of pieces of data in a slice of a pie chart?

What are the examples of a pie chart?

There are many real-life examples of pie charts, such as:
Representation of marks obtained by students in a class
Representation of kinds of cars sold in a month
To show the type of food liked by people in a room
Test your Knowledge on Pie Chart
Q5