Statistics is a stream of mathematics that is applied in various fields. When numerals are repeated in statistical data, this repetition is known as Frequency and which can be written in the form of a table, called a frequency distribution. A Frequency distribution can be shown graphically by using different types of graphs and Histogram is one among them. In this article, let us discuss in detail about what is a histogram, how to create the histogram for the given data, different types of the histogram, and the difference between the histogram and bar graph in detail.

In other words, histogram a diagram involving rectangles whose area is proportional to the frequency of a variable and width is equal to the class interval.

How to Make Histogram?

You need to follow the below steps to construct a histogram.

Although histograms seem similar to graphs, there is a slight difference between them. The histogram does not involve any gaps between the two successive bars.

When to Use Histogram?

The histogram graph is used under certain conditions. They are:

Difference Between Histogram And Bar Graph

The above differences can be observed from the below figures:

Histogram (no gaps between bars) 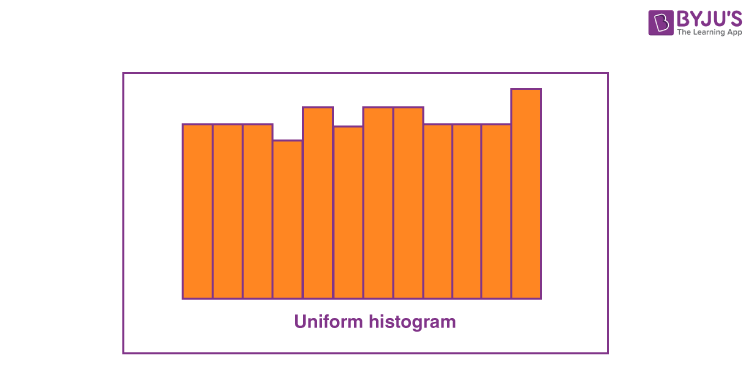 A uniform distribution reveals that the number of classes is too small, and each class has the same number of elements. It may involve distribution that has several peaks.

If a histogram has two peaks, it is said to be bimodal. Bimodality occurs when the data set has observations on two different kinds of individuals or combined groups if the centres of the two separate histograms are far enough to the variability in both the data sets.

When you draw the vertical line down the centre of the histogram, and the two sides are identical in size and shape, the histogram is said to be symmetric. The diagram is perfectly symmetric if the right half portion of the image is similar to the left half. The histograms that are not symmetric are known as skewed.

A Probability Histogram shows a pictorial representation of a discrete probability distribution. It consists of a rectangle centred on every value of x, and the area of each rectangle is proportional to the probability of the corresponding value. The probability histogram diagram is begun by selecting the classes. The probabilities of each outcome are the heights of the bars of the histogram.

Question: The following table gives the life times of 400 neon lamps. Draw the histogram for the below data.

The histogram for the given data is: 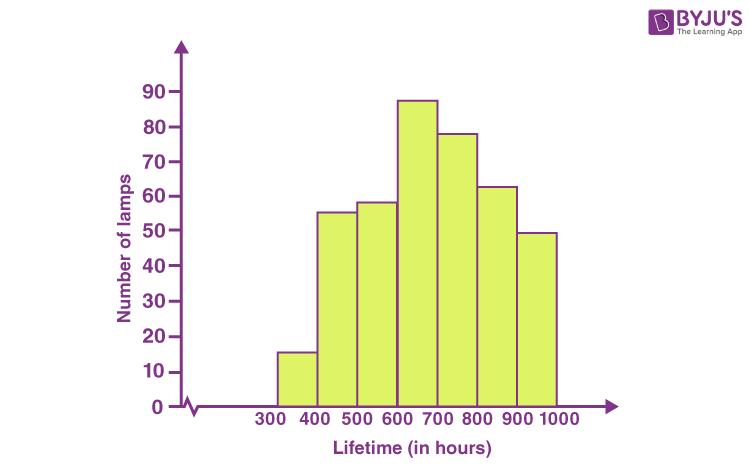 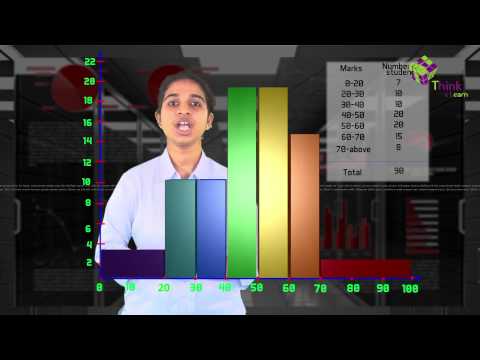 Are histogram and bar chart the same?

Which histogram represents the consistent data?

Can histogram be drawn for the normally distributed data?

When a histogram is skewed to right?

When a histogram is skewed to the left?

To know more about histograms, graphs and other statistical concepts, visit BYJU’S -The Learning App today!