Precision refers to the amount of information that is conveyed by a number in terms of its digits; it shows the closeness of two or more measurements to each other. It is independent of accuracy.

If you weigh an object five times and you get 3.2 kg every time, then your measurement is very precise. Precision refers to a value in decimal numbers after the whole number, and it does not relate with accuracy. The concepts of accuracy and precision are almost related, and it is easy to get confused. 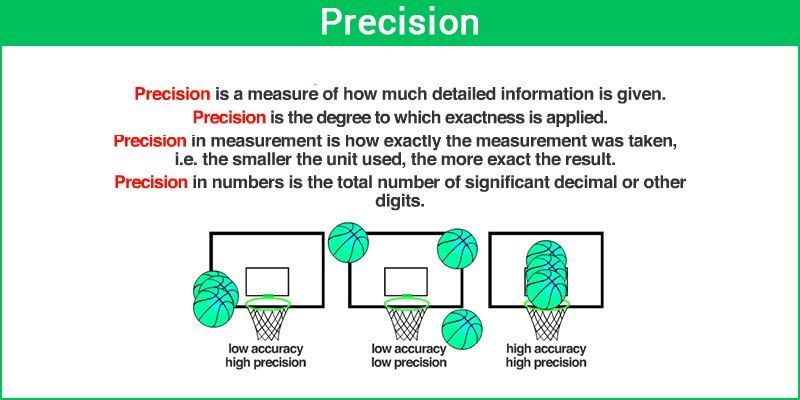 Precision is a number that shows an amount of the information digits and it expresses the value of the number.
For Example- The appropriate value of pi is 3.14 and its accurate approximation. But the precision digit is 3.199 which is less than the exact digit. It has numerous forms in statistics, arithmetic, and precision etc.

Difference Between Precision and Accuracy

Precision is the amount of information that is conveyed by a value. Whereas Accuracy is the measure of correctness of the value in correlation with the information.

According to the questions:

A number that is not precise but accurate is 3.14. It is accurate based on closeness and no other number with three digits can get closer to the target.

The above figure shows a dart game having three images,

(i) The first one shows Good accuracy and good precision, as all the three darts are are close to maximum score region (accurate) and also all the darts are close to each other (precise).

(ii) The second figure shows Poor accuracy but good precision, as all the three darts are close enough but far away from the maximum score region.

(iii) The third figure shows Poor accuracy and poor precision, as all the darts are neither nearby nor to the maximum score region.

The consequence of multiplication = 41.4.

Here the decimal or significant digit is one that is the precision value is one.