In Maths, integers are the numbers which can be positive, negative or zero. These numbers are used to perform various arithmetic calculations, like addition, subtraction, multiplication and division. The examples of integers are, 1, 2, 5,8, -9, -12, etc. We have different types of numbers in Mathematics, such as;

But here we are going to discuss integers, its definition and types.

What are Math Integers?

The word integer originated from the Latin word “Integer” which means whole. It is a special set of whole numbers comprised of zero, positive numbers and negative numbers and denoted by the letter Z.
Examples of Integers – 1, 6, 15.
Fractions, decimals, and percents are out of this basket. Examples – -2.4, 3/4, 90.6.

The major Properties of Integers are:

We are living in a world of numbers where everything depends on numbers. Yet they are expressed or represented in different forms and share a few general characteristics. In order to differentiate each of them, mathematicians initiated the grouping system. They categorized numbers based on their similarities and dissimilarities. These gave birth to the types of numbers like natural numbers, whole numbers, rational numbers, real and imaginary numbers and so on. 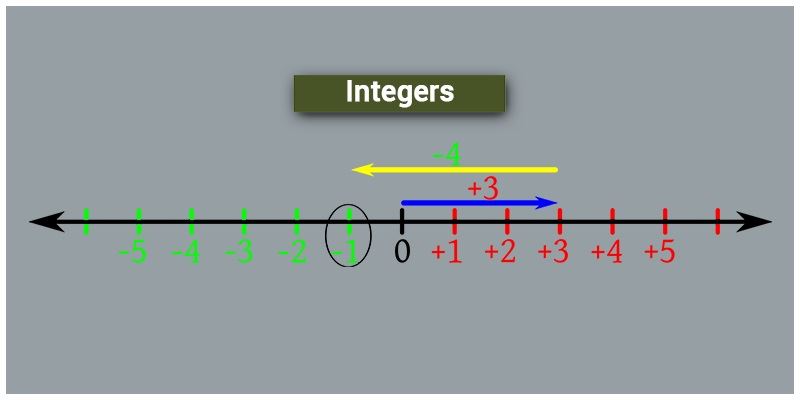 As a set, it can be represented as follows:

Zero is neither a positive nor a negative integer. It is a neutral number i.e. zero has no sign (+ or -).

Integers are not just numbers on a paper; they have many real-life applications. Effect of positive and negative numbers in the real world is different. They are mainly used to symbolize two contradicting situations.

Some real-life situations where integers come into play are player’s scores in golf, football and hockey tournaments, the rating of movies or songs, in banks credits and debits are represented as positive and negative amounts respectively.

Question : Plot the following integers on the number line: To learn about the properties of integers and to solve problems on the topic, download BYJU’S – The Learning App from Google Play Store and watch interactive videos. Also, take free tests to practice for exams. To study about other topics, visit www.byjus.com and browse among thousands of interesting articles.