Difference between Parabola and Hyperbola 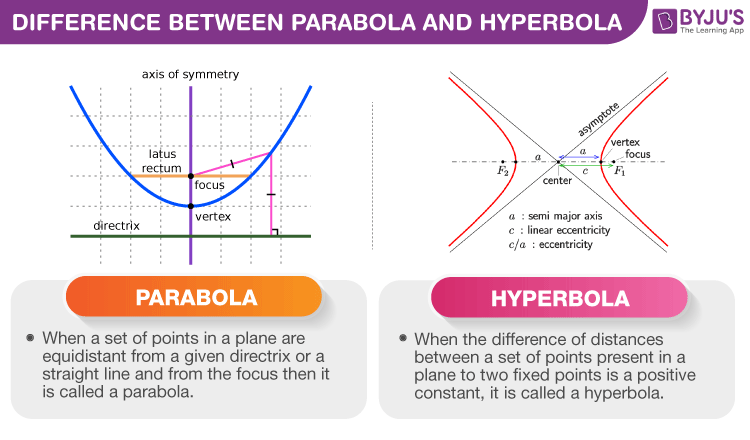 Definition of Parabola and Hyperbola

The section of the cone called parabola is formed if a plane (flat surface) divides the conical surface, which presents parallel to the side of the cone.

Similarly, the conic section called hyperbola is formed when a plane divides the cone parallel to its axis.

Both the conic sections, parabola and hyperbola, are different in size, shape and other different criteria, including the formulas that are employed to determine it. In this article, let us understand how is a parabola difference from a hyperbola.

What is the difference between Parabola and Hyperbola?

Both hyperbolas and parabolas are open curves; in other words, the curve of parabola and hyperbola does not end. It continues to infinity. But in case of the circle and ellipse, the curves are closed curves.

What is a Parabola?

Parabola is the locus of all points which are equally spaced from a fixed line (called directrix) and a fixed point (called the focus).

A hyperbola is the locus of all those points in a plane where the difference in their distances from two fixed points in the plane is constant. It has two foci and directrices.

What are the four conic sections?

What is the equation of parabola?

What is the equation of hyperbola?

The equation of the hyperbola is given by;
(x2/a2) – (y2/b2) = 1
Test your knowledge on Difference Between Parabola And Hyperbola
Q5