A pyramid is defined as a three-dimensional structure encompassing a polygon as its base. You must have heard about The Great Pyramid of Giza, which is structured in the same concept. Every corner of this structure is linked to a single apex which makes it appear as a distinct shape. The edge of each base and it’s top makes a triangle. In Maths, you will learn this geometrical shape and its properties along with the formulas for pyramids to find surface area and volumes. 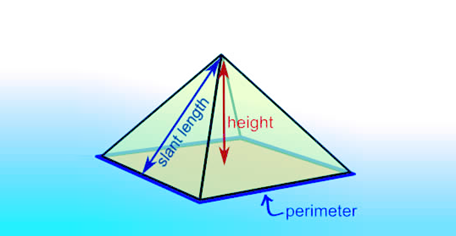 There are different types of pyramids that are named based on the shapes of their bases.

The base of this pyramid has the shape of a triangle; therefore, we call it as a triangular pyramid.

The base of this type of pyramid has a shape of a square; therefore, we call it a Square Pyramid. 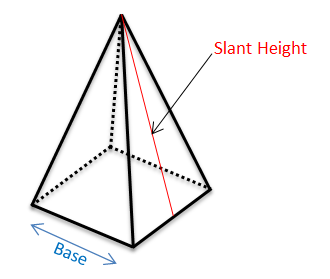 The base of this pyramid has the shape of a Pentagon; therefore, we call it a Pentagonal Pyramid.

The apex of this pyramid is exactly over the middle of the base, hence named as Right Pyramid.

The apex of this pyramid is not exactly over the middle of its base and named as Oblique Pyramid. 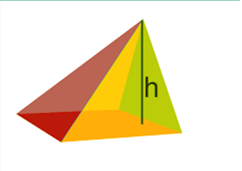 To distinguish between regular and irregular Pyramid, you need to consider the shape of the base. If the base of a polygon is regular, it is labelled as Regular Pyramid, else it is considered as Irregular Pyramid. You can see the figures given below for both the pyramids

To calculate the volume, the formula is;

Note: The base area is the area of the base of the pyramid, which will vary based on its types.

Keep visiting us and download BYJU’S – The Learning App to continue learning more maths concepts in an engaging and effective way.