A Pyramid is a polyhedron that has a base and 3 or greater triangular faces that meet at a point above the base (the apex). In the case of a square pyramid, the base is in square shape and it has four faces. A most famous example of such a pyramid in real life is the Great Pyramid of Giza.

On a small scale when we learn about pyramids, then we have to learn the other concepts related to them, such as volume of pyramid, area of pyramid. In this article, we will come across all the relevant topics of the square pyramid. 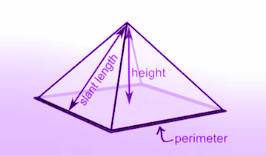 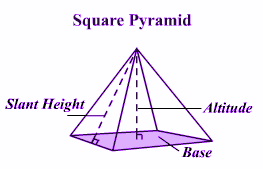 A square pyramid is shown by the Wheel graph W5. A wheel graph is the one formed by connecting a single universal vertex to all vertices of a cycle.

The different types of square pyramids are :

If all the edges are of equal length, then the sides form equilateral triangles, and the pyramid is an equilateral square pyramid.

The Johnson square pyramid can be classified by a single edge-length parameter l. The height h, the surface area A, and the volume V of such a pyramid are:

In a right square pyramid, all the lateral edges are of the same length, and the sides other than the base are congruent isosceles triangles.

A right square pyramid with base length l and height h has the following formula for surface area and volume:

There are formulas for square pyramid based on volume, area, height and surface area.

Where a is the base edge length.

h is the height.

Where a is the base edge length.

h is the height.

The general formula for the total surface area of a regular pyramid is given by:

P is the perimeter of the base

l the slant height and

B the area of the base

Where h is the height

And l is the base length

Where h is the height

And l is the base length

Net of a Square Pyramid

A net of a 3D shape is a pattern reached when the surface of a three-dimensional figure is laid out horizontally showing each face of the figure. A solid may have different nets.

Steps to determine whether net forms a solid are as follows:

Nets are of use when we need to find the surface area of the solids. 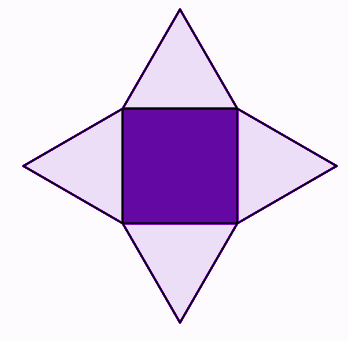 Example 1: Find the volume of a regular square pyramid with base sides 10 cm and altitude 18 cm.

The formula for the volume of a pyramid is given by:

Therefore, the volume of the given square pyramid is 600  cm3.

Example 2: Find the lateral surface area of a regular pyramid which has a triangular base and each edge of the base is equal to 8 cms and the slant height is 5 cms.

The perimeter of the base is the sum of the sides.

Example 3: Find the total surface area of a regular pyramid having a square base where the length of each edge of the base is equal to 16 cms, the slant height of a side is 17 cms and the altitude is 15 cms.

The perimeter of the base is 4s because it is a square.

The area of the square base = s2