A line graph is a unique graph which is commonly used in statistics. It represents the change in a quantity with respect to another quantity. For example, the price of different flavours of chocolates varies, which we can represent with the help of this graph. This variation is usually plotted in a two-dimensional XY plane. If the relation including any two measures can be expressed utilizing a straight line in a graph, then such graphs are called linear graphs. Thus, the line graph is also called a linear graph. Here, we are going to discuss what a line graph is, its types, procedure to draw a line graph, and examples in detail.

A line graph or line chart or line plot is a graph that utilizes points and lines to represent change over time. It is a chart that shows a line joining several points or a line that shows the relation between the points. The graph represents quantitative data between two changing variables with a line or curve that joins a series of successive data points. Linear graphs compare these two variables in a vertical axis and a horizontal axis.

The following are the types of the line graph. They are: 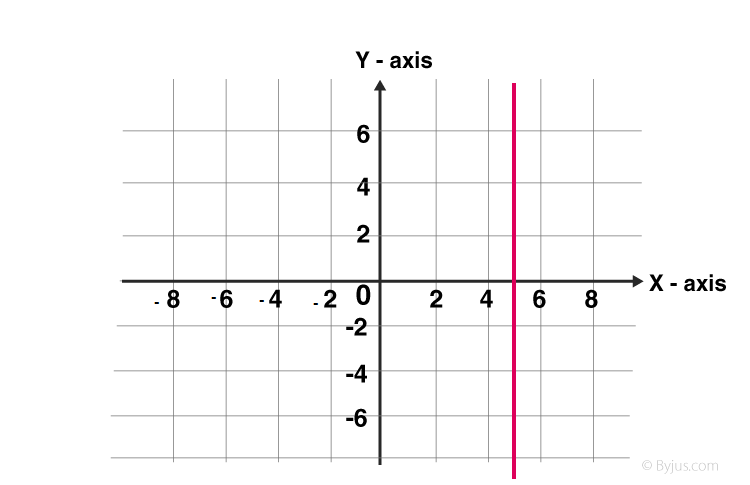 A line graph is a graph formed by segments of straight lines that join the plotted points that represent given data. The line graph is used to solve changing conditions, often over a certain time interval. A general linear function has the form y = mx + c, where m and c are constants.

The fundamental rule at the rear of sketching a linear graph is that we require only two points to graph a straight line. The subsequent procedure is followed in drawing linear graphs:

Title: The title explains what graph is to be plotted.

Scale: The scale is the numbers that explain the units utilized on the linear graph.

Labels: Both the side and the bottom of the linear graph have a label that indicates what kind of data is represented in the graph. X-axis describes the data points on the line and the y-axis shows the numeric value for each point on the line.

Bars: They measure the data number.

Data values: they are the actual numbers for each data point.

How to Make a Line Graph?

To plot a linear/line graph follow the below steps:

Example: See the graph below. 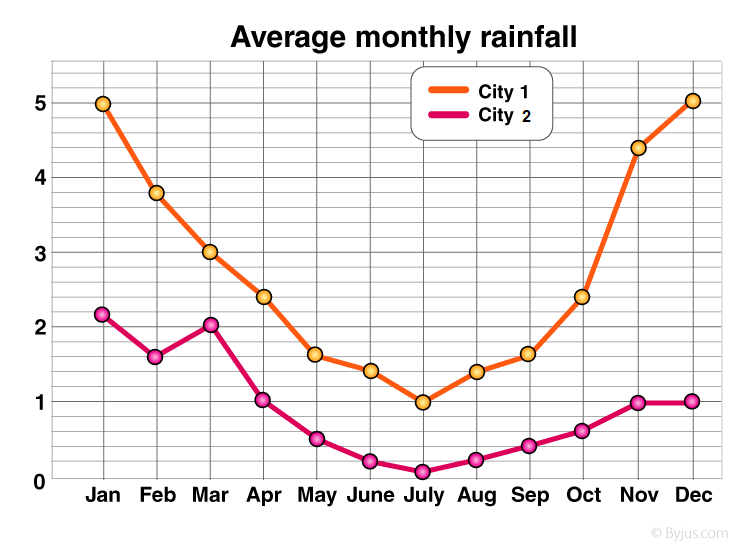 The points on the double line graph show the average monthly rainfall in the two cities (city 1, city 2). The separate lines that are made by connecting the points for each city.

The important use of line graph is to track the changes over the short and long period of time. It is also used to compare the changes over the same period of time for different groups. It is always better to use the line than the bar graph, whenever the small changes exist.  For example, in a company finance team wants to plot the changes in the cash amount that the company has on hand over time. In that case, they use the line graph plotting the points over the horizontal and the vertical axis. It usually represents the time period of the data.

Step 1: Change the inequality into a compound inequality

Step 2: Subtract 2 from all three sides to get

Step 3: Place this value on a number line

To learn different types of graphs used in Statistics, register with BYJU’S – The Learning App and download the app to get Maths-related videos.

What is a line graph used for?

Generally, line graphs or line charts are used to track variations over time, which may be long-term or short-term. We can also use line graphs to compare changes over the same period for more than one group.

How do you make a line graph?

To make a linear/line graph, follow the below steps:
Step 1: Observe the data from the data-table to choose a suitable scale.
Step 2: Draw and label the scale on x and y axes, i.e. the horizontal and vertical axes, respectively.
Step 3: List each item and place the points (taking x-value as the x-coordinate and y-value as the y-coordinate) on the graph.
Step 4: Finally, join the plotted points with line segments to get a line chart.

How does a line graph work?

A line graph helps understand the performance or comparisons over time by observing the line’s steepness on a graph sheet.

What are the five parts of a line graph?

What must a line graph have?

It is essential to know that all line graphs must have a title part. A line graph possesses two axes, namely x and y. The events and the categories required to compare for a given time should be taken on the x-axis of a line graph. The y-axis describes the scale, which expresses the data and is organized into regular intervals.
Test your knowledge on line graph
Q5