Mathematics is a subject which not just deals with the proofs, but also involves a wide sweep of the human activities and experiences, which includes the ideas, patterns, problems, mistakes, and the corrections. The mathematical proofs are of great importance in the field of modern mathematics. It is usually considered as to whatever the remark, statement, result one uses in the field of mathematics, it is meaningless until it is accompanied by some of the accurate mathematical proof. Maths theorems are the statements which are demonstrated true by some proven mathematical arguments and operations.

Statement and Proof of Stewart’s Theorem 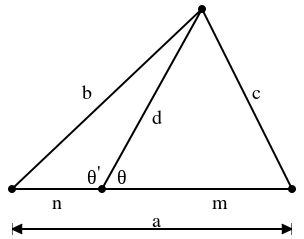 In the field of geometry, Stewart’s theorem gives the relationship between the lengths of sides of the triangle as well as the length of the cevian of the triangle. This theorem is named after the Scottish mathematician naming Matthew Stewart in the year 1746.

The theorem can be completed by the use of the law of cosines.

Hence, this is the required proof.

This theorem can also be proved by drawing the perpendicular from the vertex of the triangle up to the base and by making use of the Pythagorean theorem for writing the distances b, d, c, in terms of altitude. The right and left-hand sides of the equation reduces algebraically to form the same kind of expression.

Stewart’s Theorem is of great importance because of the versatility of the theorem in solving up of various geometric problems.