Secant of a Circle

Secant of the Circle Definition

A straight line that intersects a circle in two points is called a secant line. A chord is the line segment that joins two distinct points of the circle. A chord is in a unique secant line and every secant line defines a unique chord. In geometry, a secant is a line that cuts any curve in at least two different points. Secant means ‘to cut’ extracted from a Latin word ‘secare’. While in a circle, a secant will touch the circle in exactly two points and a chord is the line segment defined by these two points, that is the interval on a secant whose endpoints are these two points.

Secant of a Circle Formula

If a secant and a tangent of a circle are drawn from a point outside the circle, then;

A secant is an extension of a chord in a circle which is a straight line segment of which the endpoints lie on the circle. If the same chord passes through the centre of the circle, then it is a diameter. So an extended Diameter is a secant.

When two secants of a circle intersect each other at a point outside the circle, there becomes an intersecting relationship between those two line segments. 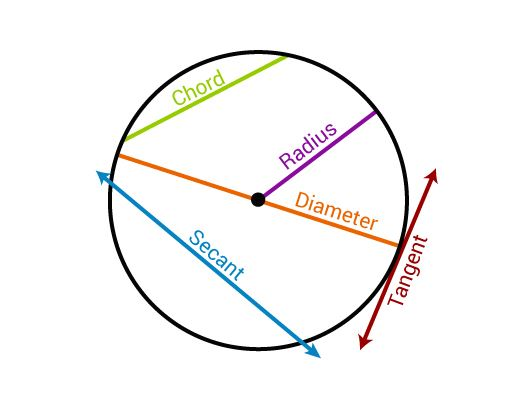 In the above figure, you can see:

How do you find the secant of a circle?

Secant intersects the circle exactly at two points. The measure of an angle formed by a tangent and a secant or two secants or two tangents which intersect outside the circle is one half the positive difference of the measures of the intercepted arcs.

Difference between a secant and a chord

A part of a line between the two endpoints is called a line segment.

Register at BYJU’S to learn more on other mathematical topics in a fun and engaging way.